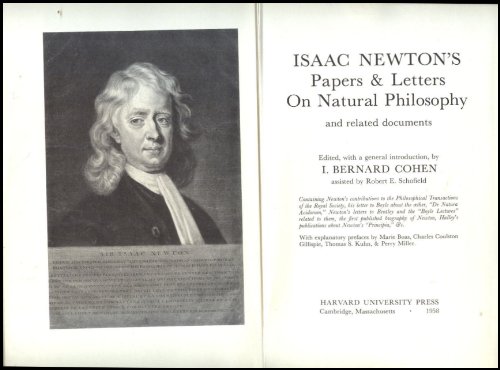 Students of intellectual history and the history of science need no reminder that the majestic figure of Isaac Newton dominates the 18th century. The "Age of Newton" must be studied in the works of Newton himself, as well as in the writings of his commentators and the scientific books and articles that either continued the investigations undertaken by Newton or ventured into new domains of knowledge which he had not explored. The intention of the present volume is to bring together for the first time Newton's scattered papers and letters on natural philosophy (excluding mathematics, pure theology, and biblical chronology) as they were actually available in print during most of the 18th century, that is, prior to Horsley's edition of Newton's works in 1779-1785. Newton's two major books on physical science, the Principia and the Opticks, are today readily accessible, and in print; this volume complements them by placing in the hands of students all of Newton's related publications issued during his lifetime or soon after his death. The Principia, the Opticks, and the papers collected in this volume thus represent the complete corpus of Newton's writings on physical science that actually influenced the scientists and thinking men of the "Age of Newton"; the Optical Lectures, however interesting, were of less importance in conditioning the advance of science or moderating the general climate of opinion on the frame of the universe or the mechanism of nature.

I. Bernard Cohen, Victor S. Thomas Professor of the History of Science, Emeritus, at Harvard University, is one of the founders of the modern study of the history of science.