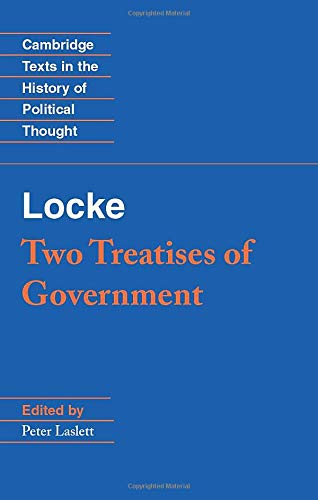 This is a new revised version of Dr. Laslett's standard edition of Two Treatises. First published in 1960, and based on an analysis of the whole body of Locke's publications, writings, and papers. The Introduction and text have been revised to incorporate references to recent scholarship since the second edition and the bibliography has been updated.

Originally published in 1960, this analysis of all of Locke's publications quickly became established as the standard edition of the Treatises as well as a work of political theory in its own right.

John Locke laid the groundwork of modern liberalism. He argued that political societies exist to defend the lives, liberties, and properties of their citizens, and that no government has any authority except by the consent of the people. When rulers become tyrants and act against the common good, then the people have a right of revolution against them. Writing against the backdrop of Charles II's savage purge of the Whig movement, Locke set out to attack monarchical absolutism and demolished the intellectual fabric of the divine right of rulers.

Book Description CAMBRIDGE UNIVERSITY PRESS, United Kingdom, 1988. Paperback. Condition: New. Student edition. Language: English. Brand new Book. This is the revised version of Peter Laslett's acclaimed edition of Two Treatises of Government, which is widely recognised as one of the classic pieces of recent scholarship in the history of ideas, read and used by students of political theory throughout the world. This 1988 edition revises Dr Laslett's second edition (1970) and includes an updated bibliography, a guide to further reading and a fully reset and revised introduction which surveys advances in Locke scholarship since publication of the second edition. In the introduction, Dr Laslett shows that the Two Treatises were not a rationalisation of the events of 1688 but rather a call for a revolution yet to come. Seller Inventory # CPO9780521357302

Shipping: US$ 5.31
From United Kingdom to U.S.A.
Destination, rates & speeds

8. Locke: Two Treatises of Government (Cambridge Texts in the History of Political Thought)

Book Description Cambridge University Press, 1988. Paperback. Condition: New. 3rd. Paperback. This is a new revised version of Dr. Laslett's standard edition of Two Treatises. First published in 1960, and based on an analysis of the whole body of Locke's publications, wri.Shipping may be from multiple locations in the US or from the UK, depending on stock availability. 478 pages. 0.567. Seller Inventory # 9780521357302