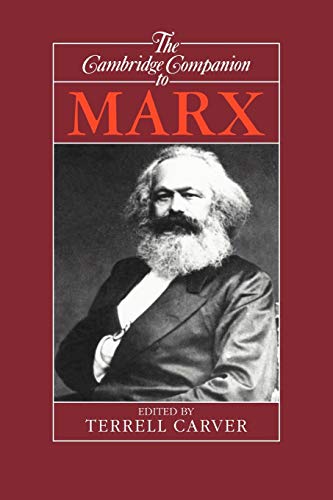 Marx was a highly original and polymathic thinker, unhampered by disciplinary boundaries, whose intellectual influence has been enormous. Yet in the wake of the collapse of Marxism-Leninism in Eastern Europe the question arises as to how important his work really is for us now. An important dimension of this volume is to place Marx's writings in their historical context and to separate what he actually said from what others (in particular, Engels) interpreted him as saying. Informed by current debates and new perspectives, the volume provides a comprehensive coverage of all the major areas to which Marx made significant contributions.

In the wake of political collapse in Eastern Europe, the intellectual influence of Marx's thought requires re-appraisal. Backed by current debate and new perspectives, this volume provides comprehensive coverage of his significant contributions.

This volume is among the first in a new series intended to serve as "companions" to the works of major philosophers. Its 13 chapters include some of the best Anglo-American authors on Karl Marx. Yet those who feel that such a book must reflect the major interests of its subject will be astonished by the absence of a chapter devoted to economics and the presence of those concerning feminism, "gender theory," and religion. The editor's stated appreciation of the separation of the "Marxian from the Marxist" could have better focused his choice of topics. Nevertheless, the unimpeachable quality of individual chapters demonstrates the enduring value of Marx's text. Richard Miller's chapter on social and political theory carefully discusses Marx's use of such terms as "exploitation," "the state," and "ideology"; Scott Meikle exposes the "confusion" of Marx's thought with "progressive Benthamite egalitarianism"; Laurence Wilde addresses the neglected question of Marx's dialectical reasoning. The bibliography is especially welcome. Recommended for academic and larger public libraries.
- Zachary T. Irwin, Pennsylvania State Univ.-Erie
Copyright 1992 Reed Business Information, Inc.

The Cambridge Companion to Marx (Paperback or Softback)