Items related to The Large, the Small and the Human Mind

Roger Penrose The Large, the Small and the Human Mind

The Large, the Small and the Human Mind 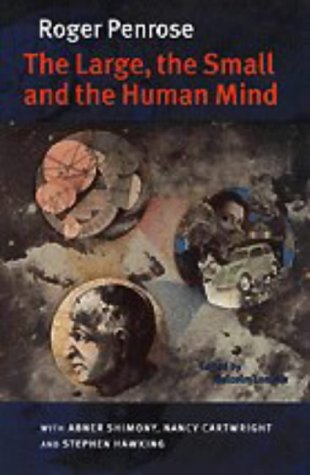 In this book, Roger Penrose presents a masterly summary of those areas of physics in which he feels there are major unsolved problems. These ideas are then challenged by three distinguished experts from different backgrounds - Abner Shimony and Nancy Cartwright as Philosophers of science and Stephen Hawking as a theoretical physicist and cosmologist. Finally, Roger Penrose responds to their thought-provoking criticisms. This paperback edition has been updated to include a striking and easily accessible example of Gödel's theorem, and a ground-breaking proposal for a physical experiment designed to test some of Penrose's most novel ideas about quantum mechanics. Penrose's enthusiasm, insight and good humour shine through this accessible, illuminating, and brilliant account of 21st-century theoretical physics.

Will quantum physics let us reduce consciousness to computation? Roger Penrose says "no" with great force and eloquence in The Large, the Small, and the Human Mind. Prepared as a series of three lectures in Cambridge's Tanner Series on Human Values, the material is both meticulously thought out and informally presented, including many illustrations by Penrose and others. For publication, the author sought out rebuttals and commentary by philosophers Abner Shimony and Nancy Cartwright, as well as his own colleague and occasional rival, the well-known theoretical physicist Stephen Hawking. Penrose then reserves the last word for himself, an author's prerogative. The result is a sharp but polite argument on the nature of thinking and its reducibility. Readers familiar with The Emperor's New Mind and Shadow of the Mind will find the arguments from quantum physics fleshed out in greater detail, but also attacked with good-natured aplomb. Those who missed out on Penrose's older forays into this territory (or are somehow uninterested in the nature of thought) will find this an excellent broad overview of the modern conception of physics, from subatomic shenanigans to the radius of the universe, as well as a stimulating debate among several great modern thinkers. Despite Penrose's certainty that our brains can't be modeled by computational systems--and hence that strong artificial intelligence will remain in science fiction--the argument continues, and will continue for some time. The Large, the Small, and the Human Mind crystallizes that debate for readers who want to keep up with the latest thinking about thinking. --Rob Lightner

An accessible, illuminating and stimulating introduction to Roger Penrose's vision of theoretical physics for the 21st century. Includes incisive contributions from Abner Shimony, Nancy Cartwright and Stephen Hawking. This paperback edition has been updated to include previously unpublished material with two ground-breaking developments in the debate.

1. The Large, the Small and the Human Mind

2. The Large, the Small and the Human Mind