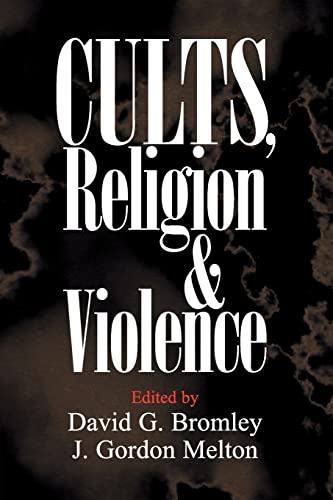 Contrary to conventional wisdom, violent episodes involving cults are rare historically. But their potential to affect and disrupt civic life looms large and efforts to manage these incidents involve controversial issues of religious freedom, politics, state intervention, and public security. The interpretive challenge of this book is to provide a social scientific explanation for these rare events. The authors conclude that they usually involve some combination of internal and external dynamics through which a new religious movement and society become polarized.

"This volume, edited by David Bromley and J. Gordon Melton, noted scholars in the field of new religious movements of "cults," is worthy of attention from other scholars as well as policymakers. The topic is very timely, given the role of religion and controversial religious groups in recent actions that have drawn considerable attention, and the list of contributing scholars is impressive." Contemporary Sociology

"This remarkable and timely collection of essays provides compelling evidence to help us understand the dark relationship between violence and religious movements.... this book helps us understand why some have been linked with the most horrific images of our contemporary time-- including the Tokyo nerve gas assault, the fiery end of the Waco standoff, and the suicide deaths of the Heaven's Gate sect. Whether they lash out in acts of terrorism or implode in chilling scenes of mass suicide, these `dramatic denouements' as David Bromley calls them, are the results of a desperate vision of a world gone wrong." Mark Juergensmeyer, University of California, Santa Barbara, author of Terror in the Mind of God: The Global Rise of Religious Violence

"This timely study offers perceptive and illuminating reflections on the troubling phenomenon of violence, sometimes self-directed, among some new religious movements. Moving beyond the headlines, and writing from a humanistic and interdisciplinary vantage point informed by both sociological and religious-history perspectives, the essays in Cults, Religion, and Violence are essential reading for anyone interested in contemporary religious culture." Paul Boyer, University of Wisconsin Madison, author of When Time Shall Be No More: Prophecy Belief in Modern American Culture

"The essays in Cults, Religion, and Violence are marked by a degree of scholarship, sanity and balance that has so often been lacking in debates over these issues since the time of Jonestown. Throughout the collection, the various authors succeed in applying critical good sense to even the most controversial of cult-related horror stories. When we face our next cult confrontationa--and we assuredly will--we can only hope that police and law-makers will have absorbed some of the critical policy lessons offered by this very significant book." Philip Jenkins, Pennsylvania State University, author of The Next Christendom: The Coming of Global Christianity

Book Description CAMBRIDGE UNIVERSITY PRESS, United Kingdom, 2017. Paperback. Condition: New. Language: English. Brand new Book. This explores the question of when and why violence by and against new religious cults erupts and whether and how such dramatic conflicts can be foreseen, managed and averted. The authors, leading international experts on religious movements and violent behavior, focus on the four major episodes of cult violence during the last decade: the tragic conflagration that engulfed the Branch Davidians in Waco, Texas; the deadly sarin gas attack by the Aum Shinrikyo in Tokyo; the murder-suicides by the Solar Temple in Switzerland and Canada; and the collective suicide by the members of Heaven's Gate. They explore the dynamics leading to these dramatic episodes in North America, Europe, and Asia, and offer insights into the general relationship between violence and religious cults in contemporary society. The authors conclude that these events usually involve some combination of internal and external dynamics through which a new religious movement and society become polarized. Seller Inventory # AAV9780521668989