Items related to The Science and Politics of Global Climate Change:...

Dessler, Andrew The Science and Politics of Global Climate Change: A Guide To The Debate

The Science and Politics of Global Climate Change: A Guide To The Debate 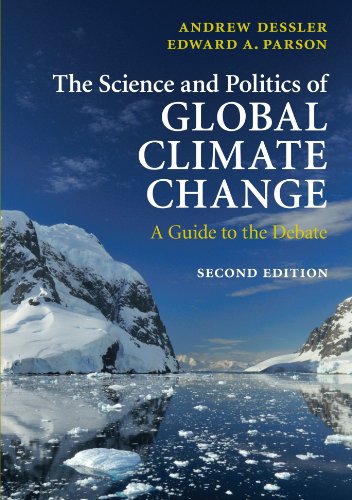 The second edition of this acclaimed book has been brought completely up to date to reflect the rapid movement of events related to climate change. It provides an integrated treatment of the science, economics, policy, and politics of climate change, for the educated non-specialist, and courses in environmental policy or climate change.

Andrew Dessler is a professor in the Department of Atmospheric Sciences at Texas A&M University. He received his PhD in chemistry from Harvard University, Massachusetts in 1994. He did postdoctoral work at NASA's Goddard Space Flight Center (1994-6) and then spent nine years on the research faculty of the University of Maryland (1996-2005). In 2000, he worked as a Senior Policy Analyst in the White House Office of Science and Technology Policy, where he collaborated with Ted Parson. Dessler's academic publications include one other book: The Chemistry and Physics of Stratospheric Ozone (2000). He has also published extensively in the scientific literature on stratospheric ozone depletion and the physics of climate.

Edward Parson is Joseph L. Sax Collegiate Professor of Law and Professor of Natural Resources and Environment at the University of Michigan. His research examines international environmental policy, the role of science and technology in public policy, and the political economy of regulation. Parson's book, Protecting the Ozone Layer: Science and Strategy (2003), won the 2004 Harold and Margaret Sprout Award of the International Studies Association. His academic articles have been published in Science, Climatic Change, Issues in Science and Technology, the Journal of Economic Literature, and the Annual Review of Energy and the Environment. Parson has led and served on several senior advisory committees for the US National Research Council and US Global Change Research Program, and has worked and consulted for the International Institute for Applied Systems Analysis, the United Nations Environment Program, the Office of Technology Assessment of the US Congress, the Privy Council Office of the Government of Canada, and the White House Office of Science and Technology Policy, where he collaborated with Andrew Dessler. In 2005, he was appointed to the National Advisory Board of the Union of Concerned Scientists. Parson spent twelve years on the faculty of Harvard's Kennedy School of Government. He holds degrees in Physics from the University of Toronto and in Management Science from the University of British Columbia, and a PhD in Public Policy from Harvard University, Massachusetts.

1. The Science and Politics of Global Climate Change: A Guide To The Debate

2. The Science and Politics of Global Climate Change: A Guide to the Debate

3. The Science and Politics of Global Climate Change: A Guide To The Debate