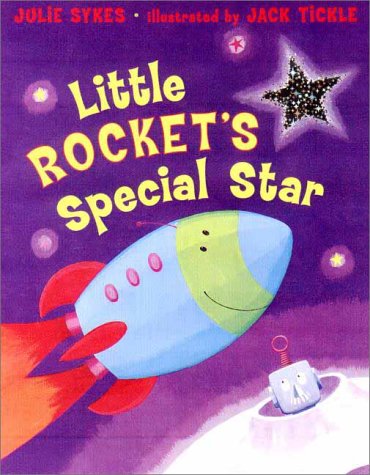 On a quest to get her father a star for his birthday, Little Rocket finds a satellite, a shuttle, an astronaut, a spaceship, and finally a very special star.

From School Library Journal:
PreSchool-Grade 1-Little Rocket wants to give her father, Big Joe, a star from the night sky as a birthday gift. She soars toward all things small and glittering, but as she gets closer, she is disappointed to find she has followed Satellite Sid, the flames from Sammy Shuttle's engines, and the glow from Andy the Astronaut's flashlight by mistake. Little Rocket perseveres on her quest, ignoring the warnings she receives: "You can't take a star-.It would be too hot to carry"; "-stars are very big. You wouldn't be able to carry it"; and "It would take years to reach them." She finally gives up her search when she finds a spaceship stuck in a crater and tows him home to safety. Big Joe is so proud that he declares, "Little Rocket, you are my very special star!" In a style reminiscent of Marcus Pfister's The Rainbow Fish (North-South, 1992), shiny silver foil inlays add interest and appeal to the simple, primary-colored illustrations. The educational tone of the astronomical facts is tempered a bit by the tiny green alien who trails after the smiling rocket on each double-page spread. The text, however, is slightly flat and didactic.
Linda Ludke, London Public Library, Ontario, Canada
Copyright 2000 Reed Business Information, Inc.