Items related to A Column of Fire (Kingsbridge) 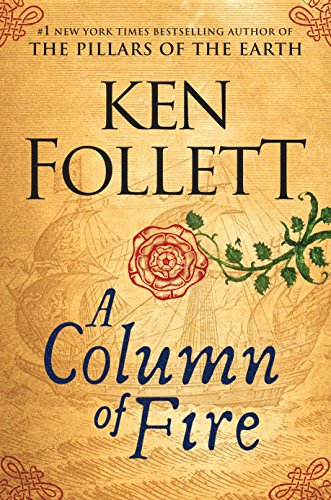 As Europe erupts, can one young spy protect his queen? #1 New York Times bestselling author Ken Follett takes us deep into the treacherous world of powerful monarchs, intrigue, murder, and treason with his magnificent new epic, A Column of Fire.

In 1558, the ancient stones of Kingsbridge Cathedral look down on a city torn apart by religious conflict. As power in England shifts precariously between Catholics and Protestants, royalty and commoners clash, testing friendship, loyalty, and love.

Ned Willard wants nothing more than to marry Margery Fitzgerald. But when the lovers find themselves on opposing sides of the religious conflict dividing the country, Ned goes to work for Princess Elizabeth. When she becomes queen, all Europe turns against England. The shrewd, determined young monarch sets up the country’s first secret service to give her early warning of assassination plots, rebellions, and invasion plans. Over a turbulent half century, the love between Ned and Margery seems doomed as extremism sparks violence from Edinburgh to Geneva. Elizabeth clings to her throne and her principles, protected by a small, dedicated group of resourceful spies and courageous secret agents.

The real enemies, then as now, are not the rival religions. The true battle pitches those who believe in tolerance and compromise against the tyrants who would impose their ideas on everyone else—no matter what the cost.

Set during one of the most turbulent and revolutionary times in history, A Column of Fire is one of Follett’s most exciting and ambitious works yet. It will delight longtime fans of the Kingsbridge series and is the perfect introduction for readers new to Ken Follett.

In 1989 The Pillars of the Earth was published and has since become Follett’s most popular novel. It reached number one on bestseller lists around the world and was an Oprah’s Book Club pick.

We hanged him in front of Kingsbridge Cathedral. It is the usual place for executions. After all, if you can’t kill a man in front of God’s face you probably shouldn’t kill him at all.

The sheriff brought him up from the dungeon below the guildhall, hands tied behind his back. He walked upright, his pale face defiant, fearless.

The crowd jeered at him and cursed him. He seemed not to see them. But he saw me. Our eyes met, and in that momentary exchange of looks there was a lifetime.

I was responsible for his death, and he knew it.

I had been hunting him for decades. He was a bomber who would have killed half the rulers of our country, including most of the royal family, all in one act of bloodthirsty savagery—if I had not stopped him.

I have spent my life tracking such would-be murderers, and a lot of them have been executed—not just hanged but drawn and quartered, the more terrible death reserved for the worst offenders.

Yes, I have done this many times: watched a man die knowing that I, more than anyone else, had brought him to his just but dreadful punishment. I did it for my country, which is dear to me; for my sovereign, whom I serve; and for something else, a principle, the belief that a person has the right to make up his own mind about God.

A Column of Fire (The Kingsbridge Novels Book 3)

A Column of Fire: 3 (Kingsbridge)

A Column Of Fire