Items related to Fundamentals of Ecology 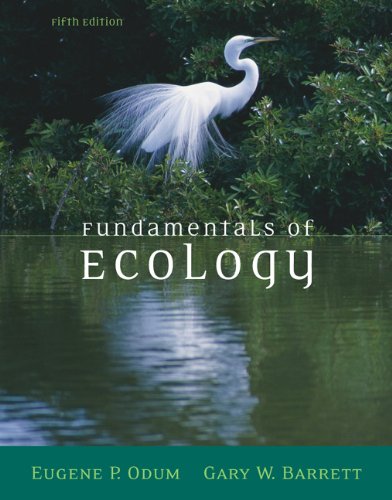 The late Eugene Odum was a pioneer in systems ecology and is credited with bringing ecosystems into the mainstream public consciousness as well as into introductory college instruction. FUNDAMENTALS OF ECOLOGY was first published in 1953 and was the vehicle Odum used to educate a wide audience about ecological science. This Fifth Edition of FUNDAMENTALS OF ECOLOGY is co-authored by Odum's protege Gary Barrett and represents the last academic text Odum produced. The text retains its classic holistic approach to ecosystem science, but incorporates and integrates an evolutionary approach as well. In keeping with a greater temporal/spatial approach to ecology, new chapters in landscape ecology, regional ecology, and global ecology have been added building on the levels-of-organization hierarchy. Also, a final chapter entitled "Statistical Thinking for Students of Ecology" provides a quantitative synthesis to the field of statistics. Contemporary and engaging, this text brings clarity and specificity to the study of ecology in the twenty-first century.

Gene Odum completed a Ph.D. in zoology with a major in ecology from the University of Illinois and served a year as resident naturalist at the Edmund Niles Huyck Preserve in Rensselaerville, N.Y. He obtained the initial grant from the Atomic Energy Commission that established the Savannah River Ecology Laboratory. In 1970, the year he was elected to the National Academy of Sciences, Odum gained statewide fame for demonstrating the economic value of Georgia¿s undeveloped wetlands and thereby helping amass political support for the Coastal Marshlands Protection Act. Gene Odum is the recipient of the highest honors given in ecology ¿ the Prix de l¿Institut de la Vie and the Crafoord Prize.

Gary W. Barrett is Odum Professor of Ecology at the Institute of Ecology at the University of Georgia. He received a B.S. in Biology from Oakland City University (1961), a M.S. in Biology from Marquette University (1963), and a Ph.D. in Zoology/Ecology from the University of Georgia (1967). He served as Director of the Institute of Ecology from 1994 through 1996. He was founder of the Institute of Environmental Sciences and the Ecology Research Center at Miami University. He is the author of five books and over 150 publications in major scientific journals and has received 42 grants totaling more than 2 million dollars. He was Ecology Program Director with the National Science Foundation from 1981-1983 and has served on or chaired numerous committees within the American Institute of Biological Sciences, the Ecological Society of America, the American Society of Mammalogists, the United States International Association for Landscape Ecology, the International Association for Ecology, and the National Research Council of the National Academy of Sciences. Barrett is a Fellow of the American Association for the Advancement of Science (1990). Barrett has served in leadership roles in numerous organizations including the Applied Ecology Section of the Ecological Society of America, American Institute of Biological Sciences, the United States Section of the International Association for Landscape Ecology, and the Association for Ecosystem Research Centers. He received the AIBS Presidential Citation Award in 2000 in recognition of leadership and contributions to the Biological Sciences and the prestigious Distinguished Landscape Ecologist Award in 2001 from the United States Section of the International Association for Landscape Ecology.