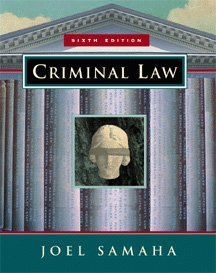 This text has become successful due to its methodical and careful explanation of traditional law categories, not because it includes every latest trend in an effort to attune to media whims. The book presents classic or contemporary cases, depending on which best illustrates a particular law.

Joel Samaha is University Distinguished Teaching Professor of Sociology at the University of Minnesota, where he teaches Criminal Law and Criminal Procedure. He received his B.A. (History), J.D., and Ph.D. (History) from Northwestern University and studied under Sir Geoffrey Elton at Cambridge University, England. Professor Samaha was admitted to the Illinois Bar, briefly practiced law in Chicago, and then taught at UCLA. In 1971, he joined the University of Minnesota, where he served as Chair of the Department of Criminal Justice Studies for four years, taught television and radio courses in criminal justice, co-taught a National Endowment for the Humanities seminar in legal and constitutional history, was named College of Liberal Arts Distinguished Teacher in 1974, and named University Distinguished Teaching Professor in 2007. Professor Samaha's works have appeared in Historical Journal, American Journal of Legal History, Minnesota Law Review, William Mitchell Law Review, and Journal of Social History.