Items related to Listening to Music (with CD)

Listening to Music (with CD) 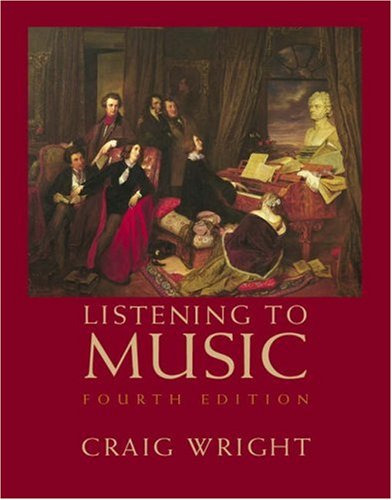 This chronological text, which covers all the major periods in music history, offers instructors and students particular help in developing listening skills in three ways: First, a free "Introduction to Listening" CD comes packaged with each student copy of the text. This CD plays all of the music discussed in the music fundamentals chapters of the text and provides an audio guide called "Instruments of the Orchestra." The guide presents the instruments and then tests students' ability to recognize them by themselves and in various combinations. Second, every chapter in Wright's text offers unique listening exercises. It is the only music appreciation book to have listening exercises built into and fully integrated with the text. Third, interactive listening guides and listening quizzes for all of the music in the text are available free via download from the Schirmer website. More than any other music appreciation text, LISTENING TO MUSIC challenges students to develop and refine their listening skills. Wright covers traditional Western music from medieval to modern, and integrates non-Western music throughout the text where appropriate, drawing comparisons between music of Western and other cultures. Concluding chapters discuss popular music and its impact on the world of music. Musical examples from each historical period are discussed within their social context, giving students a broad sense not only of a piece's composition, but also of its historical and cultural meaning.

Craig M. Wright received his Bachelor of Music degree at the Eastman School of Music in 1966 and his Ph.D. in musicology from Harvard University in 1972. He began his teaching career at the University of Kentucky and for the past 40 years has been teaching at Yale University, where he is the Henry L. and Lucy G. Moses Professor of Music as well as Director of Online Education. He teaches his perennially popular introductory course "Listening to Music", also part of the offerings of Open Yale Courses, and his selective seminar "Exploring the Nature of Genius". The author of numerous scholarly books and articles on composers ranging from Leoninus to Bach, Dr. Wright has also received many awards, including a Guggenheim Fellowship, the Einstein and Kinkeldey Awards of the American Musicological Society, and the Dent Medal of the International Musicological Society. In 2004 he was awarded the honorary degree Doctor of Humane Letters from the University of Chicago, and in 2010 he was elected as a member of the American Academy of Arts and Sciences, joining fellow inductee banjo player Steve Martin. Dr. Wright has also published LISTENING TO MUSIC, CHINESE EDITION (Cengage Learning/Three Union Press, 2012), translated and simplified by Profs. Li Xiujung (China Conservatory, Beijing) and Yu Zhigang (Central Conservatory, Beijing), both of whom worked with Wright at Yale; LISTENING TO MUSIC and LISTENING TO WESTERN MUSIC, Seventh Editions (Cengage Learning, 2015); and MUSIC IN WESTERN CIVILIZATION, MEDIA UPDATE (Cengage Learning, 2010) with coauthor Bryan Simms. He is presently at work on a volume titled MOZART'S BRAIN: EXPLORING THE NATURE OF GENIUS.

"The listening guides are a decided strength and are masterfully conceived and executed."

"Strengths: 1. Wright has written with extreme clarity. He doesn't waste words or indulge in scholarly "overkill. 2. He has done a good job of relating musical forms and styles to popular music forms. Of particular note are the examples of the Sting rondo and Elton John's use of basso ostinato (would it be possible to have those pieces included on the CDs? I fear that I don't own either of them). 3. The introductory CD contains the best examples of musical instruments, musical element and textures and forms that I've ever heard."

"The new layout with more, shorter chapters is an improvement] in that it does break up the longer chapters; it presents less of an apparent obstacle for students--which is excellent!"

"[for part openers with timelines] Good idea - with what is happening in the world at that time - so that the music is put into context for the students."

"[On LISTENING TO WESTERN MUSIC] Thank you for considering this. I teach an entirely separate course on non-Western music so I have no use for any of the world music content--also there simply isn't time in 15 weeks to cover even all of the art music."

4. Listening to Music (with CD)