Items related to Visual Communication: Images with Messages (with InfoTrac) 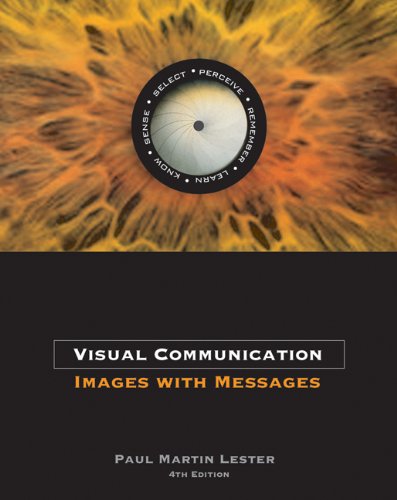 VISUAL COMMUNICATION: IMAGES WITH MESSAGES is the only text to offer substantial coverage of issues specific to all forms of visual communication. Helping students analyze visual messages using a technique similar to the one used to evaluate words, VISUAL COMMUNICATION offers physiological and theoretical background on visual perception, then moves to discussion of various media (including typography, graphic design, informational graphics, photography, television, video, and interactive media) and the visible role they play in our lives.

Paul Martin Lester is a tenured, full professor of communications at California State University, Fullerton. After receiving an undergraduate degree in journalism from the University of Texas at Austin and working as a photojournalist for The Times-Picayune in New Orleans, Lester received his Master's from the University of Minnesota and a Ph.D. from Indiana University in mass communications. He is the author or editor of VISUAL JOURNALISM: A GUIDE FOR NEW MEDIA PROFESSIONALS (with Christopher R. Harris); IMAGES THAT INJURE: PICTORIAL STEREOTYPES IN THE MEDIA, Second Edition (with Susan Ross); DESKTOP COMPUTING WORKBOOK, PHOTOJOURNALISM AN ETHICAL APPROACH; and THE ETHICS OF PHOTOJOURNALISM. In addition, Lester has published numerous articles in major communications journals. He has given keynote speeches, panel discussions, presentations and workshops throughout the United States and in Australia, Canada, South Africa, Spain, Sweden, and the Netherlands. Lester's areas of expertise include e-learning, photojournalism practice, mass media and professional ethics, desktop and Internet publishing, visual communications, and new communications technologies.