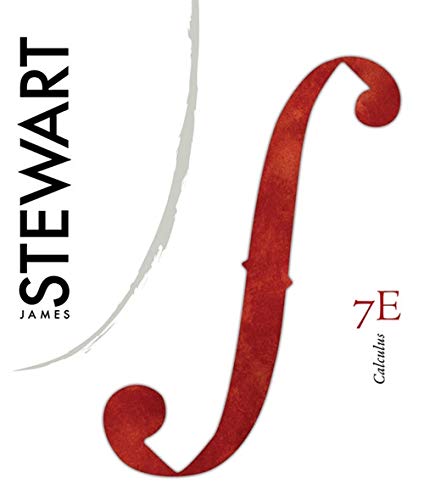 Success in your calculus course starts here! James Stewart's Calculus texts are worldwide best-sellers for a reason: they are clear, accurate, and filled with relevant, real-world examples. With Calculus (Seventh Edition), Stewart conveys not only the utility of calculus to help you develop technical competence, but also gives you an appreciation for the intrinsic beauty of the subject. His patient examples and built-in learning aids will help you build your mathematical confidence and achieve your goals in the course!


James Stewart's calculus texts are widely renowned for their mathematical precision and accuracy, clarity of exposition, and outstanding examples and problem sets. Millions of students worldwide have explored calculus through Stewart's trademark style, while instructors have turned to his approach time and time again. In the Seventh Edition of Calculus, Stewart continues to set the standard for the course while adding carefully revised content. The patient explanations, superb exercises, focus on problem solving, and carefully graded problem sets that have made Stewart's texts best sellers continue to provide a strong foundation for the Seventh Edition. From the most unprepared student to the most mathematically gifted, Stewart's writing and presentation serve to enhance understanding and build confidence.

The late James Stewart received his M.S. from Stanford University and his Ph.D. from the University of Toronto. He did research at the University of London and was influenced by the famous mathematician George Polya at Stanford University. Stewart was most recently Professor of Mathematics at McMaster University, and his research field was harmonic analysis. Stewart was the author of a best-selling calculus textbook series published by Cengage, including CALCULUS, CALCULUS: EARLY TRANSCENDENTALS, and CALCULUS: CONCEPTS AND CONTEXTS, as well as a series of precalculus texts.

Book Description Cengage Learning, 2012. Softcover. Condition: New. ***International Edition***Soft cover/Paperback*** Textbook printed in English. ***Brand New***. Most international edition has different ISBN and Cover design. Some book may show sales disclaimer such as "Not for Sale or Restricted in US" on the cover page but it is absolutely legal to use. All textbook arrives within 5-7business days. Please provides valid phone number with your order with easy delivery. Seller Inventory # Ch9780538497817