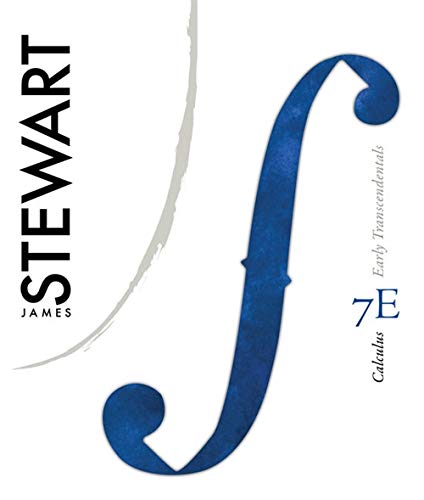 Note: This is Standalone book and does not incldue Access Card/Code.

Success in your calculus course starts here! James Stewart's CALCULUS: EARLY TRANSCENDENTALS texts are world-wide best-sellers for a reason: they are clear, accurate, and filled with relevant, real-world examples. With CALCULUS: EARLY TRANSCENDENTALS, Seventh Edition, Stewart conveys not only the utility of calculus to help you develop technical competence, but also gives you an appreciation for the intrinsic beauty of the subject. His patient examples and built-in learning aids will help you build your mathematical confidence and achieve your goals in the course.


James Stewart's Calculus: Early Transcendentals texts are widely renowned for their mathematical precision and accuracy, clarity of exposition, and outstanding examples and problem sets. Millions of students worldwide have explored calculus through Stewart's trademark style, while instructors have turned to his approach time and time again. In the Seventh Edition of Calculus: Early Transcendentals, Stewart continues to set the standard for the course while adding carefully revised content. The patient explanations, superb exercises, focus on problem solving, and carefully graded problem sets that have made Stewart's texts bestsellers continue to provide a strong foundation for the Seventh Edition. From the most unprepared student to the most mathematically gifted, Stewart's writing and presentation serve to enhance understanding and build confidence.

Book Description Condition: New. Brand New Paperback International Edition.We Ship to PO BOX Address also. EXPEDITED shipping option also available for faster delivery.This item may ship from the US or other locations in India depending on your location and availability. Seller Inventory # ANNNUS-79102

Book Description soft cover. Condition: New. International Edition. No supplemental materials. International Editions may have a different cover or ISBN but generally have the exact same content as the US edition, just at a more affordable price. In some cases, end of chapter questions may vary slightly from the US edition. International Editions are typically printed in grayscale, and likely will not have any color throughout the book. New. Books ship from multiple locations depending on availability. All orders are shipped with tracking information. We take pride in our customer service. Please contact us if you have any questions regarding this listing. Seller Inventory # 14005