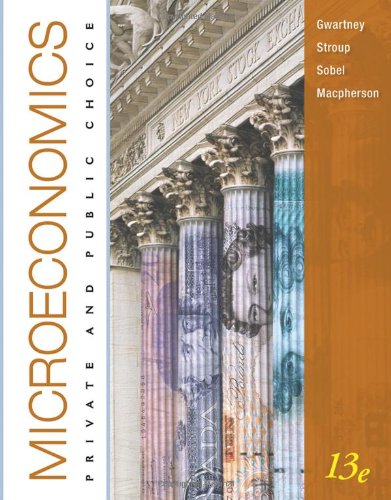 MICROECONOMICS: PRIVATE AND PUBLIC CHOICE, the most accessible principles books on the market, has been updated to include coverage of the recent economic conditions. The new edition reflects current economic conditions, helping students apply economic principles to the world around them. You'll find analysis and explanation of measures of economic activity applied to today's markets and highlighting the recession of 2008-2009, plus text on the lives and contributions of notable economists. Common economic myths are dispelled, and the "invisible hand" metaphor is applied to economic theory, demonstrating how it works to stimulate the economy. The thirteenth edition of MICROECONOMICS: PRIVATE AND PUBLIC CHOICE includes a robust set of online multimedia learning tools, with video clips and free quizzes designed to support classroom work. A completely updated Aplia interactive learning system is also available, completely with practice problems, interactive tutorials, online experiences and more.

James D. Gwartney holds the Gus A. Stavros Eminent Scholar Chair at Florida State University, where he directs the Stavros Center for the Advancement of Free Enterprise and Economic Education. His writings have been widely published in both professional journals and popular media. He is the co-author of Common Sense Economics: What Everyone Should Know about Wealth and Prosperity (St. Martin's Press, 2005), a primer on economics and personal finance. Gwartney's current research focuses on the measurement and determination of factors that influence cross-country differences in income levels and growth rates. In this regard he is the coauthor (with Robert Lawson) of the annual report, Economic Freedom of the World, which provides information on the institutions and policies of 141 countries. This data set, published by a worldwide network of institutes in 79 countries, is widely used by scholars investigating topics ranging from economic growth to peaceful relations among nations. He served as Chief Economist of the Joint Economic Committee of the U.S. Congress during 1999-2000. Gwartney was invited by the incoming Putin Administration in March 2000 to make presentations and have discussions with leading Russian economists concerning the future of the Russian economy. In 2004 he was the recipient of the Adam Smith Award of the Association of Private Enterprise Education for his contribution to the advancement of free market ideals. He is a past President of the Southern Economic Association and the Association for Private Enterprise Education. Gwartney earned his Ph.D. in economics from the University of Washington.

Richard L. Stroup is Professor of Economics Emeritus at Montana State University, as well as Senior Fellow at the Property and Environment Research Center (PERC) and Visiting Professor in Economics at North Carolina State University. For the three years before his retirement from Montana State University, he served as head of the Department of Agricultural Economics & Economics. Professor Stroup, who has a Ph.D. in economics from the University of Washington, was one of the originators of the New Resource Economics, the academic approach popularly known as free market environmentalism. He also served as director of the Office of Policy Analysis in the U.S. Department of the Interior and has been published widely in professional journals and popular publications. He is author or contributing editor of numerous books on the economics of resources and the environment and the author of ECONOMICS: WHAT EVERYONE SHOULD KNOW ABOUT ECONOMICS AND THE ENVIRONMENT (Cato Institute). Most recently he co-authored COMMON SENSE ECONOMICS: WHAT EVERYONE SHOULD KNOW ABOUT WEALTH AND PROSPERITY (St. Martin's Press, 2005) with James Gwartney and Dwight Lee. Stroup has lectured throughout the United States and abroad to professional and general audiences. He also is an adjunct scholar with the Cato Institute.

Russell S. Sobel earned his Ph.D. in economics from Florida State University in 1994. He has published more than 150 books and articles, and has received national recognition for his works on entrepreneurship and FEMA reform. He serves on the editorial board for three academic journals, and on the advisory board for four university centers. He has won numerous awards for both his teaching and his research. He regularly teaches courses in both principles of economics and public economics, and gives lectures at economic education outreach programs. He is a Visiting Scholar in Entrepreneurship in the School of Business Administration at The Citadel.

David A. Macpherson is the E.M. Stevens Distinguished Professor of Economics at Trinity University. Previously, he was Director of the Pepper Institute on Aging and Public Policy and the Rod and Hope Brim Eminent Scholar of Economics at Florida State University, where he has received two university-wide awards for teaching excellence. Professor Macpherson is the author of many articles in leading labor economics and industrial relations journals, including the JOURNAL OF LABOR ECONOMICS, JOURNAL OF HUMAN RESOURCES, and INDUSTRIAL AND LABOR RELATIONS REVIEW. He is also coauthor of CONTEMPORARY LABOR ECONOMICS, Ninth Edition, as well as the annual Union Membership and Earnings Data Book: Compilations from the Current Population Survey. His specialty is applied labor economics. His current research interests include pensions, discrimination, labor unions, and the minimum wage. Macpherson received his undergraduate degree and Ph.D. from Pennsylvania State University.