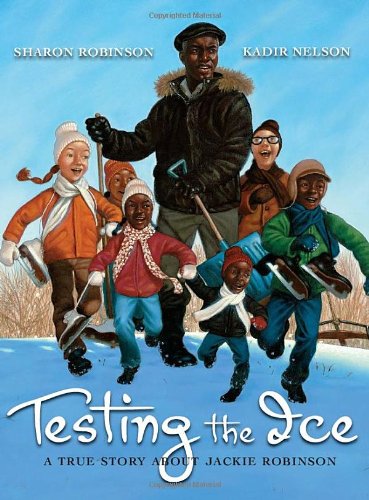 Sharon Robinson, the daughter of baseball legend Jackie Robinson, has crafted a hearwarming, true story about growing up with her father.

When Jackie Robinson retires from baseball and moves his family to Connecticut, the beautiful lake on their property is the center of everyone's fun. The neighborhood children join the Robinson kids for swimming and boating. But oddly, Jackie never goes near the water.
In a dramatic episode that first winter, the children beg to go ice skating on the lake. Jackie says they can go--but only after he tests the ice to make sure it's safe. The children prod and push to get Jackie outside, until hesitantly, he finally goes. Like a blind man with a stick, (contd.)

Sharon Robinson, daughter of baseball legend Jackie Robinson, is the author of several works of fiction and nonfiction. She has also written several widely praised nonfiction books about her father, including Jackie's Nine: Becoming Your Best Self and Promises to Keep: How Jackie Robinson Changed America.
Kadir Nelson illustrated two Caldecott Honor Books: Moses and Henry's Freedom Box. Ellington Was Not a Street by Ntozake Shange won the Coretta Scott King Award. Will Smith’s Just the Two of Us won an NAACP Image Award, and his new book, We are the Ship continues to garner major awards. Nelson showed artistic talent at age 3 and began working in oils by age 16. He lives with his family in San Diego, California.

Grade 1–3—An affectionate tribute to Robinson's father's courage and character. In 1955, the family leaves New York City for a lakeside home in an idyllic, woodsy setting in Connecticut. Sharon and her brothers quickly make friends with the neighborhood kids and spend much of their time playing in and around the lake, though she notices that her dad never joins them in the water. Her new friends are awestruck by him and his stories of his breakthrough into the Major Leagues. When he bravely tests the ice so that the children can play on the frozen lake, Sharon realizes that he can't swim. Robinson neatly sums up the significance of her father's achievements while depicting him as a loving family man. Nelson's large paintings, done in pencil, watercolor, and oils, dramatically convey Robinson's public persona, the intensely competitive athlete, and contrasts that with the relaxed, yet commanding father Sharon and her brothers knew. This book is for a younger audience than the author's Jackie's Nine: Jackie Robinson's Values to Live By (2001) and Promises to Keep: How Jackie Robinson Changed America (2004, both Scholastic), but it adds another facet to children's understanding of the man and should resonate with a wide range of readers.—Marilyn Taniguchi, Beverly Hills Public Library, CA END

1. Testing the Ice: A True Story about Jackie Robinson (Hardback or Cased Book)