Items related to The Tales of Beedle the Bard, Standard Edition (Harry... 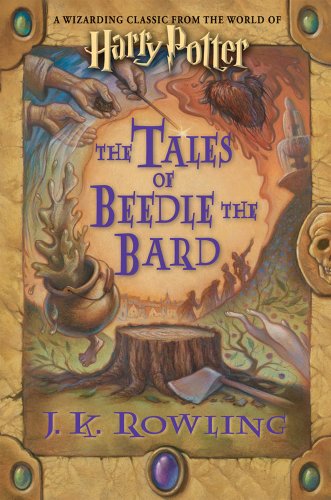 The Tales of Beedle the Bard, a Wizarding classic, first came to Muggle readers' attention in the book known as Harry Potter and the Deathly Hallows. Now, thanks to Hermione Granger's new translation from the ancient runes, we present this stunning edition with an introduction, notes, and illustrations by J. K. Rowling, and extensive commentary by Albus Dumbledore.

Never before have Muggles been privy to these richly imaginative tales: "The Wizard and the Hopping Pot," "The Fountain of Fair Fortune," "The Warlock’s Hairy Heart," "Babbitty Rabbitty and Her Cackling Stump," and of course "The Tale of the Three Brothers." But not only are they the equal of fairy tales we now know and love, reading them gives new insight into the world of Harry Potter.

This purchase also represents another very important form of giving: From every sale of this book, Scholastic will give its net proceeds to Lumos, an international children’s charity founded in 2005 by J. K. Rowling. Lumos is dedicated to ending the institutionalization of children, a harmful practice that affects the lives of up to eight million disadvantaged children around the world who live in institutions and orphanages, many placed there as a result of poverty, disability, disease, discrimination and conflict; very few are orphans. Lumos works to reunite children with their families, promote family-based care alternatives, and help authorities to reform their systems and close down institutions and orphanages. www.wearelumos.org

The Tales of Beedle the Bard, Collector's Edition
Offered Exclusively by Amazon (Available in Limited Quantities)

In December 2007, J.K. Rowling unveiled The Tales of Beedle the Bard, a very special book of five fairy tales illustrated by the bard herself, embellished with silver ornaments and mounted moonstones. Amazon was fortunate to come into possession of one of the original copies, and it was our privilege to share images and reviews of this incredible artifact. Now J.K. Rowling is giving millions of Harry Potter fans worldwide cause for celebration with a new edition of The Tales of Beedle the Bard (available December 4, 2008) and Amazon is thrilled to exclusively offer a luxuriously packaged Collector's Edition designed to evoke the spirit of the handcrafted original.

Tucked in its own case disguised as a wizarding textbook found in the Hogwarts library, the Collector's Edition includes an exclusive reproduction of J.K. Rowling's handwritten introduction, as well as 10 additional illustrations not found in the Standard Edition or the original. Opening the case reveals a velvet bag embroidered with J.K. Rowling’s signature, in which sits the piece de resistance: your very own copy of The Tales of Beedle the Bard, complete with metal skull, corners, and clasp; replica gemstones; and emerald ribbon. As a special gift for fans, the Collector's edition also includes a set of 10 ready-for-framing prints of J.K. Rowling's illustrations, enclosed in a velvet-lined pocket in the lid of the outer case.

Offering the trademark wit and imagination familiar to Rowling's legions of readers--as well as Aesop's wisdom and the occasional darkness of the Brothers Grimm--each of these five tales reveals a lesson befitting children and parents alike: the strength gained with a trusted friendship, the redemptive power of love, and the true magic that exists in the hearts of all of us. Rowling's new introduction also comments on the personal lessons she has taken from the Tales, noting that the characters in Beedle's collection "take their fates into their own hands, rather than taking a prolonged nap or waiting for someone to return a lost shoe," and "that magic causes as much trouble as it cures."

But the true jewel of this new edition is the enlightening and comprehensive commentary (including extensive footnotes!) by Professor Albus Percival Wulfric Brian Dumbledore, who brings his unique wizard's-eye perspective to the collection. Discovered "among the many papers which Dumbledore left in his will to the Hogwarts Archives," the venerable wizard's ruminations on the Tales allow today's readers to place them in the context of 16th century Muggle society, even allowing that "Beedle was somewhat out of step with his times in preaching a message of brotherly love for Muggles" during the era of witch hunts that would eventually drive the wizarding community into self-imposed exile. In fact, versions of the same stories told in wizarding households would shock many for their uncharitable treatment of their Muggle characters.

Professor Dumbledore also includes fascinating historical backstory, including tidbits such as the history and pursuit of magic wands, a brief comment on the Dark Arts and its practitioners, and the struggles with censorship that eventually led "a certain Beatrix Bloxam" to cleanse the Tales of "much of the darker themes that she found distasteful," forever altering the meaning of the stories for their Muggle audience. Dumbledore also allows us a glimpse of his personal relationship to the Tales, remarking that it was through "Babbity Rabbity and Her Cackling Stump" that "many of us [wizards] first discovered that magic could not bring back the dead."

Both a wise and delightful addition to the Harry Potter canon, this new translation of The Tales of Beedle the Bard is all that fans could hope for and more--and an essential volume for the libraries of Muggles, wizards, and witches, both young and old.

The Children's Voice Campaign
The Tales of Beedle the Bard is published by The Children’s High Level Group (CHLG), registered charity number 1112575, a charity co-founded in 2005 by J.K. Rowling and Emma Nicholson MEP to make life better for vulnerable children.

All net proceeds from the sale will be donated to The Children's Voice campaign.

The Children's Voice campaign is run by CHLG. It campaigns for child rights across Europe, particularly in Eastern Europe where over a million children and teenagers are growing up in institutions, often in unacceptable conditions. In most cases they are without adequate human or emotional contact and stimulation, while many only just survive without life's basics such as adequate shelter and food.

CHLG's Children's Voice campaign helps around a quarter of a million children each year through education activities; outreach work in institutions; and a dedicated telephone and email help line.

Also Available: the Standard Edition
The Tales of Beedle the Bard, Standard Edition contains the five fairy tales, a new introduction by J.K. Rowling, illustrations reproduced from the original handcrafted book, and commentary on each of the tales from Professor Albus Dumbledore.

Stay tuned for updated images and details about The Tales of Beedle the Bard, Collector's Edition. Check our Frequently Asked Questions page for more information.

Amazon Reviews the Original Handcrafted Edition of The Tales of Beedle the Bard
The following is Amazon's original December 2007 review. Please note that the review and images below pertain to the handmade book purchased at auction:

There is no easy way to define the experience of seeing, holding, or reading J.K. Rowling's The Tales of Beedle the Bard, so let's just start with one word: "Whoa." The very fact of its existence (an artifact pulled straight out of a novel) is magical, not to mention the facts that only seven copies exist in all the world and each of the never-before-told tales is handwritten and illustrated by J.K. Rowling herself (and it's quite clear from the first few pages that she has some skill as an artist). Rowling's handwriting is like the familiar scrawl of a favorite aunt--it's not hard to read, but it does require attention--allowing you to take it slow and savor the mystery of each next word.

So how do you review one of the most remarkable tomes you've ever had the pleasure of opening? You just turn each page and allow yourself to be swept away by each story. You soak up the simple tales that read like Aesop's fables and echo the themes of the series; you follow every dip and curve of Rowling's handwriting and revel in every detail that makes the book unique--a slight darkening of a letter here, a place where the writing nearly runs off the page there. You take all that and you try and bring it to life, knowing that you will never be able to do it justice. With that, let's dig in and begin at the beginning, shall we? --Daphne Durham

Caution: the full reviews contain spoilers!
Please note that the review and images below pertain to the handmade book purchased at auction in December 2007.

Magic, Mystery, and Mayhem: A Conversation with J.K. Rowling
"I am an extraordinarily lucky person, doing what I love best in the world. I’m sure that I will always be a writer. It was wonderful enough just to be published. The greatest reward is the enthusiasm of the readers." --J.K. Rowling

Rediscover the Complete Harry Potter Series
About the Author:

J.K. Rowling is the author of the bestselling Harry Potter series of seven books, published between 1997 and 2007, which have sold over 450 million copies worldwide, are distributed in more than 200 territories and translated into 79 languages, and have been turned into eight blockbuster films by Warner Bros. She has written three companion volumes to the series in aid of charity: Quidditch Through the Ages and Fantastic Beasts and Where to Find Them in aid of Comic Relief; and The Tales of Beedle the Bard in aid of her children's charity Lumos. Her website and e-publisher Pottermore is the digital hub of the Wizarding World. She has recently collaborated with writer Jack Thorne and director John Tiffany on the stage play Harry Potter and the Cursed Child Parts One and Two, which is now running at The Palace Theatre in London's West End. J.K. Rowling is also the author of a novel for adult readers, The Casual Vacancy, and, under the pseudonym Robert Galbraith, is the author of three crime novels featuring private detective Cormoran Strike, which are to be adapted for BBC television. Fantastic Beasts and Where to Find Them marks J.K. Rowling's screenwriting debut.

The Tales of Beedle the Bard: A Wizarding Classic from the World of Harry Potter