Items related to The 39 Clues: Unstoppable: Nowhere to Run

The 39 Clues: Unstoppable: Nowhere to Run 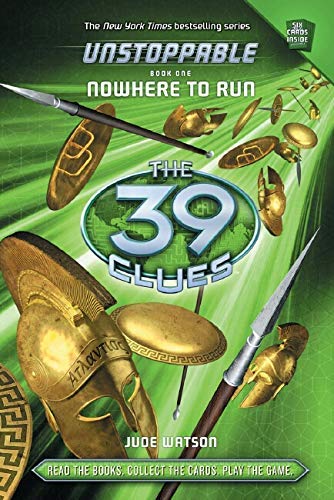 The Cahill family has a secret. For five hundred years, they have guarded the 39 Clues – thirty-nine ingredients in a serum that transforms whomever takes it into the most powerful person on earth. If the serum got into the wrong hands, the disaster would rock the world. So certain Cahills have always made it their mission to keep the serum safe, buried, locked away. Until now.

Thirteen-year-old Dan Cahill and his older sister, Amy, are the latest guardians of the Clues. They think they’ve done everything right, but a tiny mistake leads to catastrophe. The serum is missing and Dan and Amy have to get it back and stop who stole it . . . before it’s game over. For everyone.

Kicking off a “39 Clues” spin-off series that will run for four episodes, this setup reunites siblings Amy and Dan Cahill with various squabbling cousins. Ruthless media tycoon J. Rutherford Pierce has stolen a serum that endows him with super powers and has set out to conquer the Earth. His grand scheme involves eliminating the Cahills, so Dan, Amy, and the others find themselves racing from Ireland to Anatolia to procure ingredients for the serum’s antidote. Meanwhile, the kids are pursued by a squad of superstrong hit men, who turn out to be astonishingly incompetent; the Cahills survive at least six assassination attempts early on in the story—but, then, the tale still has a long way to go, and it wouldn’t do to start killing off cast members yet. Each episode will be packaged with collectible cards, as well as codes that will unlock additional adventures on an associated web page. With a 39 Clues–inspired film tentatively scheduled for release in 2014, this fast read will find a ready-made audience. Grades 4-6. --John Peters

1. The 39 Clues: Unstoppable: Nowhere to Run

3. The 39 Clues: Unstoppable: Nowhere to Run