Items related to I Survived the Hindenburg Disaster, 1937 (I Survived...

Tarshis, Lauren I Survived the Hindenburg Disaster, 1937 (I Survived #13) 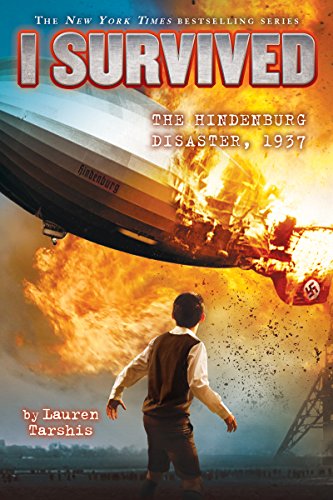 In May of 1937, the Hindenburg, a massive German airship, caught fire while attempting to land in New Jersey, killing 35 people. Lauren Tarshis's latest thrilling addition to the New York Times bestselling I Survived series, will feature an 11-year-old boy in the middle of this historic disaster.

Lauren Tarshis's New York Times bestselling I Survived series tells stories of young people and their resilience and strength in the midst of unimaginable disasters. Lauren has brought her signature warmth and exhaustive research to topics such as the September 11 attacks, the destruction of Pompeii, Hurricane Katrina, and the bombing of Pearl Harbor, among others. She lives in Westport, Connecticut, and can be found online at www.laurentarshis.com.

Praise for I Survived The Sinking of the Titanic, 1912:
"The fast pace and intrinsically fascinating disaster story will keep readers turning the pages." -- Kirkus Reviews

Praise for I Survived The Shark Attacks of 1916:
"A gripping story that will hold the interest of reluctant readers. " -- School Library Journal

Praise for I Survived Hurricane Katrina, 2005:

"Expressive illustrations capture the drama of the storm and its aftermath, but the book's real power comes from its exploration of what it means to be a hero." -- Booklist

Praise for I Survived The Battle of Gettysburg, 1863:

Praise for I Survived The Destruction of Pompeii, AD 79:
"Tarshis serves up another gripping adventure... with the light-speed pacing and death-defying maneuvering fans have come to expect." -- Booklist

Book Description Hardback. Condition: New. Library ed. Language: English. Brand new Book. New York Times bestselling author Lauren Tarshis provides a birds-eye view of one of America's most ghastly accidents ever be captured on film, the Hindenburg Disaster of 1937.The greatest flying machine ever built is about to crash.For eleven-year-old Hugo Ballard, flying on the Hindenburg is a dream come true. Hugo, his parents, and his four-year-old sister, Gertie, are making the thrilling four-thousand-mile journey across the Atlantic in a zeppelin as big as the Titanic.But as the zeppelin gets ready to land, a blast rocks the Hindenburg and fire consumes the ship. The entire disaster lasts a mere thirty-two seconds, but in those few seconds, Hugo finds himself separated from his family and in a desperate race to escape the flames. The Hindenburg is doomed. And so, it seems, is Hugo. Will he survive this historic disaster?. Seller Inventory # AAC9780545868600