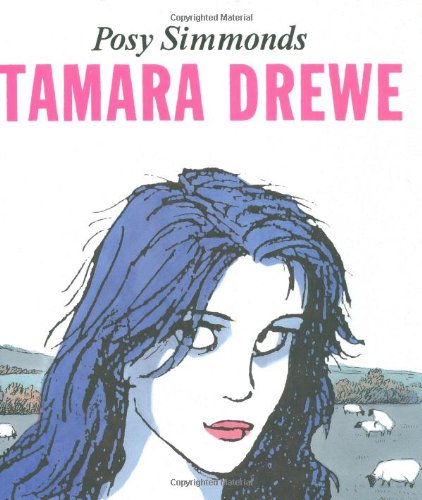 Posy Simmonds, Britain’s best-loved cartoonist and the author of Gemma Bovery, has now created the irresistible Tamara Drewe, a graphic novel that delightfully skewers modern mores and manners with great wit and understanding for the foibles of humanity.
Loosely inspired by Thomas Hardy’s Far From the Madding Crowd, Tamara Drewe follows a year at Stonefield, a bucolic writer’s retreat run by Beth and Nicholas Hardiman, where Dr. Glen Larson, an American professor and struggling novelist, is staying. The ambitious young Tamara Drewe, mourning the loss of her mother, has returned to her family home nearby. A bookish girl not so long ago, Tamara is now a gossipy columnist at a London paper and undeniably sexy. She quickly has every man in the vicinity—Glen, Nicholas, and the handyman, Andy—falling at her feet, while teenage best friends Casey and Jody become infatuated with Tamara and her ex-rock-star fiancé, Ben. Meanwhile, long-suffering Beth sees to the needs of the writers while managing the farm, the household, and the many affairs of her husband, a best-selling detective novelist.
Perhaps even more satisfying than your favorite nineteenth-century novel, with its fine, expressive drawings, deft storytelling, and nods to both the past and the present, yet unlike anything that has come before, Tamara Drewe is that rare graphic novel for grownups.

Posy Simmonds is the author of many books for adults and children, including the widely acclaimed Gemma Bovery. A. N. Wilson called Gemma Bovery a “work of genius” and more than one reviewer suggested that it should be entered for the Booker Prize. Simmonds has contributed a series of weekly cartoon strips to the UK’s Guardian since 1977 and has won international awards for her work. She lives in London.

About the Author:
POSY SIMMONDS is a cartoonist and graphic novelist. She is the author of the graphic novel Gemma Bovery and has contributed weekly cartoons since 1977 to the Guardian, where Tamara Drewe was originally serialized. She lives in London.
From Publishers Weekly:
Starred Review. This irresistible graphic novel by longtime Guardian cartoonist Simmonds is roughly based on Hardy's Far from the Madding Crowd and uses it to depict the English upper-middle class having tawdry midlife crises. Beth, the wife of renowned author Nicholas Hardiman, runs an idyllic writer's retreat where she's parlayed her skill at caring for her husband into caring for other writers. She and her literary charges barely notice the locals who, jammed on council estates, look on with envy. Enter young Tamara Drewe, a newspaper columnist famed for her post–plastic surgery beauty. With Ben, her rock-star boyfriend, and her citified ways, she knocks Beth's little group on its head and gets stalked by two local girls. After Ben leaves Tamara, she decides the already adulterous Nicholas would be a nice lay on the rebound, only he falls in love with her. The art captures British frumpiness so well it's scary; middle-age spread hulks through this book like sad weight, but it's less skilled with beauty; Tamara's looks don't sway the reader the way they sway the characters in the book. But the view on how feminism has failed in moneyed Britain is priceless. A wonderful and slightly evil book. (Oct.)
Copyright © Reed Business Information, a division of Reed Elsevier Inc. All rights reserved.