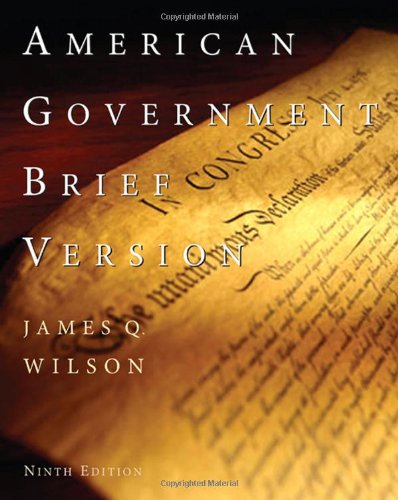 This popular brief edition text for the one-semester or one-quarter American Government course maintains the framework of Wilson's complete text, emphasizing the historical development of the American political system, who governs, and to what end. Completely up to date, AMERICAN GOVERNMENT, BRIEF, 9e offers new coverage of such key and emerging issues as creationism and the establishment clause, tactics from the 2008 presidential campaign, Congressional ethics, repercussions from the Valerie Plume scandal, national debt, the Social Security debate, military involvement in Iraq, and much more.

James Q. Wilson most recently taught at Boston College and Pepperdine University. He was Professor Emeritus of Management and Public Administration at UCLA and was previously Shattuck Professor of Government at Harvard University. He wrote more than a dozen books on the subjects of public policy, bureaucracy, and political philosophy. He was president of the American Political Science Association (APSA), and he is the only political scientist to win three of the four lifetime achievement awards presented by the APSA. He received the Presidential Medal of Freedom, the nation's highest civilian award, in 2003. Professor Wilson passed away in March of 2012 after battling cancer. His work helped shape the field of political science in the United States. His many years of service to his American Government book remain evident on every page and will continue for many editions to come.

"Wilson has always had the gift of lucidity. ... I like the idea of Enduring Questions, as today's students seem to need the bottom line."