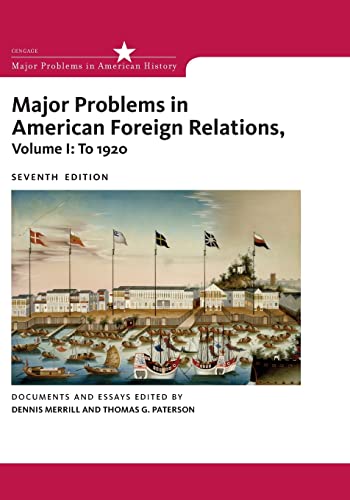 Designed to encourage critical thinking about history, this reader uses a carefully selected group of primary sources and analytical essays to allow users to test the interpretations of distinguished historians and draw their own conclusions about the history of American foreign policy. This book serves as an effective educational tool for courses on U.S. foreign policy, recent U.S. history, or 20th Century U.S. history. The Seventh Edition introduces new studies on America's early foreign relations which seek to position the nation's post "9-11" attitudes and behaviors within historical context. Some of the new literature spotlights cultural relations, and the ways in which culturally constructed attitudes about class, gender, race, and national identity have shaped American's perceptions of the world and subsequently its overseas relationships.

Dennis Merrill, a professor of history and department chair at the University of Missouri-Kansas City, received his Ph.D. from the University of Connecticut. He is the author of Bread and the Ballot: The United States and India's Economic Development, 1947-1963. The Society for Historians of American Foreign Relations honored him with a Stuart L. Bernath Article Prize, and he has received two Fulbright awards to India. His current research interests focus on U.S.-Third World relations during the Cold War and the history of international tourism.

Thomas G. Paterson, professor emeritus of history at the University of Connecticut, graduated from the University of New Hampshire (B.A., 1963) and the University of California, Berkeley (Ph.D., 1968). He is the author of Soviet-American Confrontation (1973), Meeting the Communist Threat (1988), On Every Front (1992), Contesting Castro (1994), America Ascendant (with J. Garry Clifford, 1995), and A People and a Nation (with Mary Beth Norton et al., 2001). Tom is also the editor of Cold War Critics (1971), Kennedy's Quest for Victory (1989), Imperial Surge (with Stephen G. Rabe, 1992), The Origins of the Cold War (with Robert McMahon, 1999), Explaining the History of American Foreign Relations (with Michael J. Hogan, 2004), and Major Problems in American Foreign Relations (with Dennis Merrill, 2010). With Bruce Jentleson, he served as senior editor for the Encyclopedia of American Foreign Relations (1997). A microfilm edition of The United States and Castro's Cuba, 1950s-1970s: The Paterson Collection appeared in 1999. He has served on the editorial boards of the Journal of American History and Diplomatic History. A recipient of a Guggenheim fellowship, he has directed National Endowment for the Humanities Summer Seminars for College Teachers. In 2000 the New England History Teachers Association recognized his excellence in teaching and mentoring with the Kidger Award. Besides visits to many American campuses, Tom has lectured in Canada, China, Colombia, Cuba, New Zealand, Puerto Rico, Russia, and Venezuela. He is a past president of the Society for Historians of American Foreign Relations, which in 2008 honored him with the Laura and Norman Graebner Award for "lifetime achievement" in scholarship, service, and teaching. A native of Oregon, Tom is now informally associated with Southern Oregon University.