Items related to Island of the Blue Dolphins 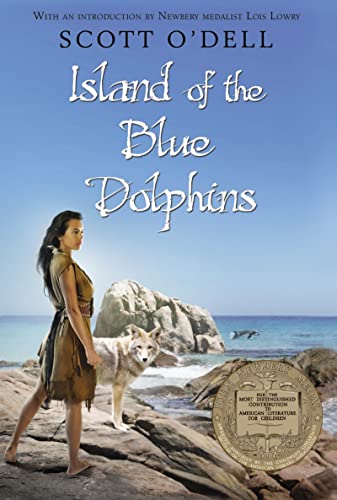 Newbery Medal winner Island of the Blue Dolphins is considered one of the greatest children's books ever written. This story of survival is as haunting and beautiful today as it was when it first appeared in print. And now, just in time to celebrate the book's fiftieth anniversary, Sandpiper is honored to bring a new paperback edition of this masterpiece to the next generation. With gorgeous packaging and an introduction by Newbery Medal winner Lois Lowry, this version will guarantee Karana's story inspires readers for decades to come.

Product Description
The Newberry Medal-winning story of a 12-year old girl who lives alone on a Pacific island after she leaps from a rescue ship. Isolated on the island for eighteen years, Karana forages for food, builds weapons to fight predators, clothes herself in a cormorant feathered skirt, and finds strength and peace in her seclusion. A classic tale of discovery and solitude returns to Houghton Mifflin Harcourt for its 50th anniversary, with a new introduction by Lois Lowry.


Amazon Exclusive: A Letter from Lois Lowry on Writing the Introduction to Island of the Blue Dolphins, 50th Anniversary Edition

Dear Amazon readers, Last summer, when I was asked to write an introduction to a new edition of Island of the Blue Dolphins, my mind went back in time to the 1960s, when my children were young and it was one of their best-loved books. But a later memory surfaced, as well, of a party I was invited to in the summer of 1979. By now the kids were grown. I was in New York to attend a convention of the American Library Association, and Scott O'Dell's publisher, Houghton Mifflin, was honoring him at a reception being held at the St. Regis Hotel. I had never met Mr. O'Dell. But because of my own children I knew his books, and I was pleased to be invited to such an illustrious event. I was staying at a nearby hotel and planned to walk over to the party. But when I began to get dressed, I encountered a problem. I was wearing, I remember, a rose-colored crępe de Chine dress. It buttoned up the back. I was alone in my hotel room. I buttoned the bottom buttons, and I buttoned the top buttons, but there was one button in the middle of my back that I simply couldn’t reach. It makes me laugh today, thinking about it, picturing the contortions I went through in that hotel room: twisting my arms, twisting my back, all to no avail. The clock was ticking. The party would start soon. I had no other clothes except the casual things I'd been wearing all day and which were now wrinkled from the summer heat. Finally I decided, The heck with it. I left the room with the button unbuttoned and headed off. When I got in my hotel elevator, a benign-looking older couple, probably tourists from the Midwest, were already standing inside, and I explained my predicament politely and asked if they could give me a hand. The gray-haired man kindly buttoned my dress for me. We parted company in the lobby of my hotel and off I went to the St. Regis, where I milled around and chatted with countless people, sipped wine, and waited for the guest of honor, Scott O'Dell, to be introduced. When he was, of course he turned out to be the eighty-one-year-old man who had buttoned my dress. But wait! There's more. Ten years passed. I had never seen Mr. O'Dell during the intervening years, but now, suddenly, we were the two speakers at a luncheon being held on a college campus somewhere. I think it may have been Vassar. We sat next to each other at the head table, nibbling our chicken, chatting about the weather. I knew he wouldn't remember me, but I certainly remembered him, and I was secretly thinking that when it was my turn to speak, I might tell the audience the amusing little anecdote about the button on my dress. But he went first. And, eyes twinkling, he started his speech with "The last time I was with Lois Lowry, we were in a New York hotel. I was helping her get dressed." He was ninety-one at the time. All of this floated back into my mind when I found myself rereading, last summer, The Island of the Blue Dolphins. None of it was appropriate to the book's introduction, of course, and I went on to write, instead, about the power of the story and the magnificence of the writing. Not that anyone needed reminding! There has never been a question about Scott O'Dell's brilliance as a writer and storyteller. But it's nice to have a chance, here, to tell an audience that he was also a sweet and funny man. Lois Lowry

Island of the Blue Dolphins (Paperback)

Book Description Paperback. Condition: New. Anniversary. Language: English. Brand new Book. Scott O'Dell's Newbery Medal-winning classic is a gripping tale of survival, strength, and courage. Based on the true story of a Nicoleńo Indian girl living alone on an island off the coast of California, Island of the Blue Dolphins has captivated readers for generations.On San Nicolas Island, dolphins flash in the surrounding blue waters, sea otter play in the vast kelp beds, and sea elephants loll on the stony beaches. Here, in the early 1800s, a girl named Karana spent eighteen years alone.Karana had to contend with the ferocious pack of wild dogs that killed her younger brother, constantly guard against Aleutian sea otter hunters, and maintain a precarious food supply. Her courage, self-reliance, and grit has inspired millions of readers in this breathtaking adventure.As Smithsonian magazine put it: For kids all over the country, reading the book in language arts classes, Karana is a powerful symbol of their growing independence. Through her, they can imagine themselves making their way in the world alone--and thriving. Seller Inventory # LIB9780547328614

Island of the Blue Dolphins Paperback

Island of the Blue Dolphins (Paperback or Softback)