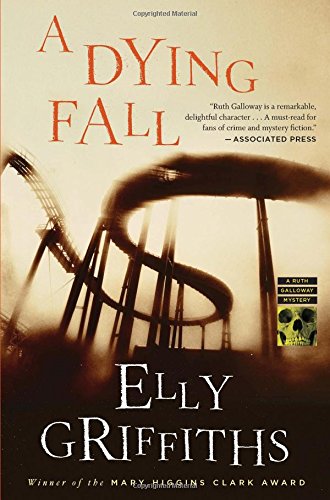 Ruth Galloway is shocked when she learns that her old university friend Dan Golding has died tragically in a house fire. But the death takes on a sinister cast when Ruth receives a letter from Dan written just before he died.

The letter tells of a great archaeological discovery, but Dan also says that he is scared for his life. Was Dan’s death linked to his find? The only clue is his mention of the Raven King, an ancient name for King Arthur.

Then Ruth is invited to examine the bones Dan found. Ruth travels to Lancashire–the hometown of DCI Nelson–with both her eighteen-month-old daughter, Kate, and her druid friend, Cathbad, in tow. She discovers a campus living in fear of a sinister right-wing group called the White Hand. She also finds that the bones revealed a shocking fact about King Arthur–and they’ve mysteriously vanished. When Nelson, visiting his mother in Blackpool, learns about the case, he is drawn into the investigation, especially when Ruth and his beloved Kate seem to be in danger. Who is willing to kill to keep the bones a secret?

PRAISE FOR THE RUTH GALLOWAY MYSTERY SERIES
“Griffiths is one of England’s freshest mystery writers. Her novels combine a dramatic sense of place with a complicated mystery, and with each new installment, her character of Ruth Galloway becomes more complex and dynamic.” –Curled Up

“Galloway is an everywoman, smart, successful, and a little bit unsure of herself. Readers will look forward to learning more about her.” –USA TODAY

“Forensic archeologist and academic Ruth Galloway is a captivating amateur sleuth–an inspired creation. The Saltmarsh where Ruth lives in isolation conjures a background of intense menace...an exciting new voice on the crime scene.” –Louise Penny
“Elly Griffiths’s Ruth Galloway–a forensic archeologist who is prickly, tough, awkward, and vulnerable–makes for the perfect amateur sleuth, and jaded copper Harry Nelson is the perfect foil. These books are must-reads–I can’t wait for the next one.” –Deborah Crombie, author of the Duncan Kincaid/Gemma James series

“Forensic archeologist Ruth Galloway stirs up fears and passions among the living even as she unearths Iron Age remains. She’s an uncommon, down-to-earth heroine whose acute insight, wry humor, and depth of feeling make her a thoroughly engaging companion.” –Erin Hart, Agatha and Anthony Award-nominated author of Haunted Ground and Lake of Sorrows.