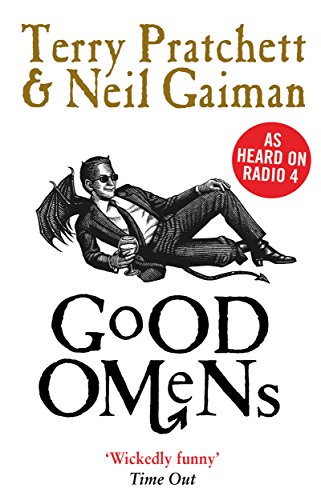 There is a distinct hint of Armageddon in the air. According to The Nice and Accurate Prophecies of Agnes Nutter, Witch (recorded, thankfully, in 1655, before she blew up her entire village and all its inhabitants, who had gathered to watch her burn), the world will end on a Saturday. Next Saturday, in fact. So the armies of Good and Evil are amassing, the Four Bikers of the Apocalypse are revving up their mighty hogs and hitting the road, and the world's last two remaining witch-finders are getting ready to fight the good fight, armed with awkwardly antiquated instructions and stick pins. Atlantis is rising, frogs are falling, tempers are flaring. . . . Right. Everything appears to be going according to Divine Plan.

Except that a somewhat fussy angel and a fast-living demon -- each of whom has lived among Earth's mortals for many millennia and has grown rather fond of the lifestyle -- are not particularly looking forward to the coming Rapture. If Crowley and Aziraphale are going to stop it from happening, they've got to find and kill the Antichrist (which is a shame, as he's a really nice kid). There's just one glitch: someone seems to have misplaced him. . . .

First published in 1990, Neil Gaiman and Terry Pratchett's brilliantly dark and screamingly funny take on humankind's final judgment is back -- and just in time -- in a new hardcover edition (which includes an introduction by the authors, comments by each about the other, and answers to some still-burning questions about their wildly popular collaborative effort) that the devout and the damned alike will surely cherish until the end of all things.

Pratchett (of Discworld fame) and Gaiman (of Sandman fame) may seem an unlikely combination, but the topic (Armageddon) of this fast-paced novel is old hat to both. Pratchett's wackiness collaborates with Gaiman's morbid humor; the result is a humanist delight to be savored and reread again and again. You see, there was a bit of a mixup when the Antichrist was born, due in part to the machinations of Crowley, who did not so much fall as saunter downwards, and in part to the mysterious ways as manifested in the form of a part-time rare book dealer, an angel named Aziraphale. Like top agents everywhere, they've long had more in common with each other than the sides they represent, or the conflict they are nominally engaged in. The only person who knows how it will all end is Agnes Nutter, a witch whose prophecies all come true, if one can only manage to decipher them. The minor characters along the way (Famine makes an appearance as diet crazes, no-calorie food and anorexia epidemics) are as much fun as the story as a whole, which adds up to one of those rare books which is enormous fun to read the first time, and the second time, and the third time...

According to The Nice and Accurate Prophecies of Agnes Nutter, Witch (the world's only completely accurate book of prophecies, written in 1655, before she exploded), the world will end on a Saturday. Next Saturday, in fact. Just before dinner.

So the armies of Good and Evil are amassing, Atlantis is rising, frogs are falling, tempers are flaring. Everything appears to be going according to Divine Plan. Except a somewhat fussy angel and a fast-living demon—both of whom have lived amongst Earth's mortals since The Beginning and have grown rather fond of the lifestyle—are not actually looking forward to the coming Rapture.

And someone seems to have misplaced the Antichrist . . .

Book Description Paperback. Condition: New. Language: English. Brand new Book. According to the Nice and Accurate Prophecies of Agnes Nutter - the world's only totally reliable guide to the future - the world will end on a Saturday. Next Saturday, in fact. Just after tea. Seller Inventory # LIB9780552137034