Items related to The World According to Garp (Black Swan)

Irving, John The World According to Garp (Black Swan)

The World According to Garp (Black Swan) 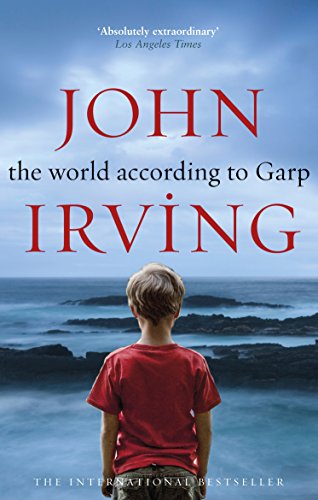 World According to Garp

"Garp was a natural storyteller," says the narrator of John Irving's incandescent novel, referring to the book's hero, the novelist Garp, who has much in common with Irving himself. "He could make things up one right after the other, and they seemed to fit."

Irving packs wild characters and weird events into his classic--officially recognized as such in a Modern Library edition with a new introduction by the author--while amazingly maintaining the rough feel of realism in every scene and the pulse of life in every heart. Many novelists of his time might have populated a novel with a novelist protagonist whose life and books comment on each other and the novel we're reading. Transsexual football players, ball turret gunners lobotomized in battle, multiple adultery, unicycling bears, mad feminists who amputate their tongues in sympathy with the celebrated victim of a horrifying rape--Irving made them all people. Even the bear is a fitting character.

In a crucial episode, Garp's wife's seduction of a young man coincidentally occurs at the moment when Garp is delighting their young sons with a reckless car trick (one of the few scenes beautifully, eerily, heartbreakingly captured in the film version as well). Many authors would have been content with the harsh comedy of the scene, but Irving respects its integrity, and he builds the rest of the book on the consequences of the event. How does he get away with his killer cocktail of slapstick and horror? Because it's simply what we all face daily, rearranged into soul-satisfying art. "Life is an X-rated soap opera," according to Garp, and who can contradict him?

Rereading Garp 20 years later, one is struck by how elegantly Irving structures his bizarre and complex story. Take the two most celebrated bits in the book, the Under Toad and Garp's story "The Pension Grillparzer," which shimmers like an exquisite Kafkaesque insect in the amber of the novel. When Garp warns his son about the "undertow" at the beach, the boy imagines a monster out of Beowulf who lurks beneath the waves to suck you under: the "Under Toad." It's funny at first, but we soon find that the Under Toad is a metaphor with teeth--he connects with a prophetic dream of death in "The Pension Grillparzer," set in Vienna. Garp's son's last words are, "It's like a dream!" And as Irving--who studied at the University of Vienna--can certainly tell you, the German word for "death" sounds precisely like the English word "toad."

All that death, and yet Garp is mainly exuberant. This story is, as Garp's stuttering writing teacher puts it, "rich with lu-lu-lunacy and sorrow." It enriches literature, and our lives. --Tim Appelo

To be honest, I never read John Irving before I read A Widow For One Year. But after I finished Widow, I went on a John Irving reading frenzy. I read A Prayer for Owen Meany, The 158 Pound Marriage, The Water-Method Man, and The Cider House Rules.

Then I fell in love with Garp.

When John Irving agreed to read the new introduction to The World According to Garp for our new Unabridged AudioBook, we were thrilled. He would record in New York, on a Wednesday morning, but needed a ride to the studio. Could anyone give him a lift?

Please. I jumped at the chance.

As we talked about Garp and the pending publication of A Widow for One Year, I suddenly realized I've been sitting in New York City traffic for the last 30 minutes with John Irving. Sure, he's one of the greatest American writers today, but he's also one of the nicest people I've ever been stuck in traffic with.
-Carrie, Random House AudioBooks Publicity

1. The World According To Garp (Black Swan S.)

Book Description Paperback. Condition: New. UNUSED, VERY GOOD, NOT EX-LIBRARY, 608 pages. This is the life and times of T. S. Garp, the bastard son of Jenny Fields - a feminist leader ahead of her times. It is also the life and death of a famous mother and her almost-famous son; theirs is a world of sexual extremes - even of sexual assassinations. It is a novel rich with 'lunacy and sorrow'; yet the dark, violent events of the story do not undermine a comedy both ribald and robust. It provides almost cheerful, even hilarious evidence of its famous last line: "In the world according to Garp, we are all terminal cases." 399. Seller Inventory # 18613

2. The World According to Garp (Black Swan)

3. The World According to Garp (Black Swan)

4. The World According to Garp (Black Swan)