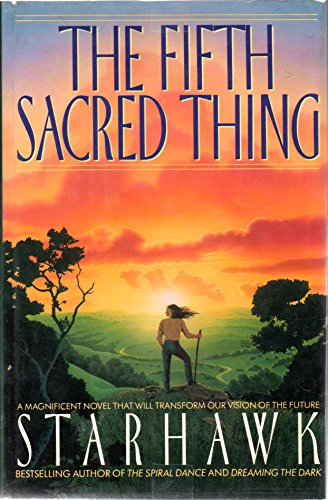 A world without poverty or hunger that honors the Four Sacred Things that sustain life--earth, air, fire, and water--is poised to clash with a nightmare society of authoritarian regimes and food and water shortages

Starhawk, author of The Fifth Sacred Thing and Walking to Mercury, lives with her husband, stepchildren, and Goddess-children in San Francisco, where she works with the Reclaiming collective.

This first novel from Starhawk (Dreaming the Dark, 1982, etc.) is a big, shaggy, sloppy dog of a fantasy about a great war taking place during the 21st century: A city of eco-feminist witches must stand up to the violence of an army bred on a repressive Christian ideology that justifies the greed of a corporate cabal of rich white men. As the story opens, Maya, a 99-year-old writer of tales about witchcraft, climbs a steep San Francisco hill and surveys a kind of reclaimed paradise: The streets have been torn up, and organic gardens bloom everywhere. Since a great ``uprising'' some years before, the city has become a kind of pagan theocracy, run by guilds and councils of eco-feminist witches who have made it a green spot in the surrounding desert. The rest of the country is ruled by the ``Stewards''--a ruthless corporate power that justifies inhuman exploitation under the banner of the ``Millennialists,'' a fundamentalist sect that is not above breeding whores and soldiers in ``pens.'' Maya is witness to a battle that kills--or tests--many of her loved ones. First, her grandson Bird returns after ten years in a prison in the ``Southland.'' While he was away, the Stewards/Millennialists have sent an engineered virus to San Francisco that killed a good many of the population. Madrone, the grandchild of Maya's woman lover and male compa¤ero (almost every witch is bisexual), is a gifted healer, so she is sent to the dangerous Southland to teach the rebel ``Web'' to heal themselves and to bring back specimens of the virus. Madrone returns after many narrow escapes to find the city occupied by the ruthless army of the Stewards--forcing the witches to put to the ultimate test their commitment to nonviolence. Starhawk deserves points for her idealism, but her vision and characterizations are only half-realized here--and further muddied as she goes on far, far too long. -- Copyright ©1993, Kirkus Associates, LP. All rights reserved.