Items related to One of Us

Smith, Michael Marshall One of Us 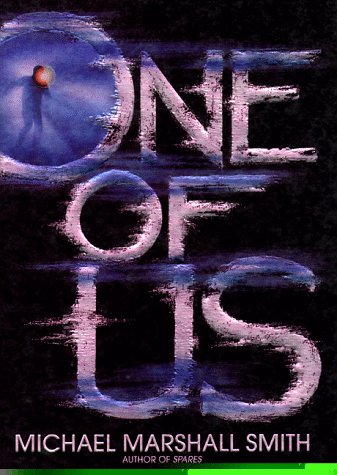 These are the questions Michael Marshall Smith asks in this electrifying new thriller--an eerie mix of disturbing ideas, heart-stopping action, and haunting power from an author who is single-handedly redefining the future of suspense fiction.

Hap Thompson had never been that good a criminal. So it's a lucky thing he's discovered something that pays even better than crime.

And it's legal.  Almost.

Hap is a receiver at REMtemp, working during the night hours, having people's dreams for them. Hap is one of the best REMtemp has ever seen. He's so good they offer him some under-the-cover work--taking on memories instead of dreams for clients who have something to forget.  And in a world falling apart at the seams, there's no shortage of business.

All Hap has to do is carry the memories for a couple of hours.  Just long enough for a client to have an affair without guilt.  Or pass a lie detector test for a crime she suddenly can't remember.  Everyone wins.  Until a beautiful young woman who committed murder leaves Hap her memory...and won't take it back.

In this world, it's not what you've done that counts--it's what you remember.

Now Hap is on the run.  The LAPD wants him for homicide. Six angels of death in grey suits and sunglasses are leaving a trail of dead bodies in his wake.  And there's a contract out on his life that has just been picked up by the best hit man in the business: his ex-wife.  And if that's not enough to give him the willies, people all around Hap are disappearing in a strange white light.

The paranormal. UFOs.  Angels.  The Bible.  A guy who claims he's God.  The key to it all may be buried somewhere deep in Hap's past. Now all he has to do is stay alive long enough to remember the most important thing of all--whether or not he's...One of Us.

If you like the brain-stretching work of William Gibson (author of Neuromancer) and Philip K. Dick (author of Do Androids Dream of Electric Sleep?, which was the basis for Blade Runner), you'll feel right at home with this latest futuristic thriller from the author of the well-received Spares (available in paperback). It's 2017, and the first time we meet Hap Thompson he's being hassled in a bar in Ensenada by his alarm clock, which not only talks but walks and has a bad attitude. Hap, a prodigious computer hacker with a pretty bad attitude himself, works for an outfit called REMtemps, which offers a unique service--removing clients' bad dreams by sucking them into the heads of paid professionals. (Could Smith have been influenced at all by the title of one of Dick's best stories, "I Can Dream It for You Wholesale?") Unfortunately, one of the bad dreams Hap is called on to swallow involves a real murder, and the search for the woman who dreamed it in the first place takes him--and us--on a literally mind-bending journey of scientific and philosophic discovery. But there's plenty of action, gadgetry, and snappy noir dialogue to make it all go down easily. --Dick Adler

Praise for One of Us:

"Readers will...close this book reeling at the implications of their own dreams and memories."
--Publishers Weekly

"Terrifying...darkly atmospheric... Smith masterfully moves the whodunit toward the future, opening up refreshing vistas for a genre rooted in the present."
--People

"An exceptionally rare find, one of unrestrained imagination, a sense of humor, and good writing. Smith's is a world that might have been created by Robert B. Parker and William Gibson as they chewed the fat at Philip K. Dick's place. A really great book."
--Mostly Murder

2. One of Us [Hardcover] Smith, Michael Marshall