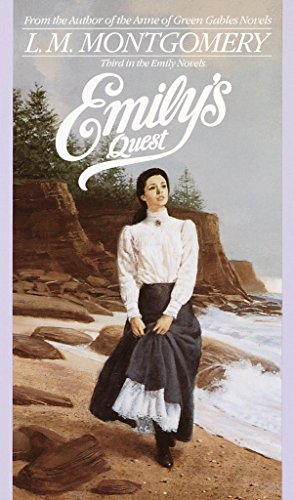 Emily knows she's going to be a great writer.  She also knows that she and her childhood sweetheart, Teddy Kent, will conquer the world together.  But when Teddy leaves home to pursue his goal to become an artist at the School of Design in Montreal, Emily's world collapses.  With Teddy gone, Emily agrees to marry a man she doesn't love ... as she tries to banish all thoughts of Teddy.  In her heart, Emily must search for what being a writer really means....

Lucy Maud Montgomery (1874-1942) was a Canadian novelist and the famed author of the Anne Shirley series. She found instant literary fame upon the publication of her first book, Anne of Green Gables. She published 20 novels and 500 short stories during her lifetime and was the first woman to be named a fellow of the Royal Society of Arts.

Laural Merlington began working in regional theater at the age of seventeen. For over thirty years, she has acted on stage, and, for over twenty, she has narrated and directed more than two hundred audiobooks. An Audie nominee, she has received several Earphones Awards. In addition to her theater and voice-over career, she also teaches college in Michigan, her home state.

One  I "No more cambric tea" had Emily Byrd Starr written in her diary when she came home to New Moon from Shrewsbury, with high school days behind her and immortality before her. Which was a symbol. When Aunt Elizabeth Murray permitted Emily to drink real tea – as a matter of course and not as an occasional concession – she thereby tacitly consented to let Emily grow up. Emily had been considered grown-up by other people for sometime, especially by Cousin Andrew Murray and Friend Perry Miller, each of whom had asked her to marry him and been disdainfully refused for his pains. When Aunt Elizabeth found this out she knew it was no use to go on making Emily drink cambric tea. Though, even then, Emily had no real hope that she would ever be permitted to wear silk stockings. A silk petticoat might be tolerated, being a hidden thing, in spite of its seductive rustle, but silk stockings were immoral. So Emily, of whom it was whispered somewhat mysteriously by people who knew her to people who didn't know her,  "she writes," was accepted as one of the ladies of New Moon, where nothing had ever changed since her coming there seven years before and where the carved ornament on the sideboard still cast the same queer shadow of an Ethiopian silhouette on exactly the same place on the wall where she had noticed it delightedly on her first evening there. An old house that had lived its life long ago and so was very quiet and wise and a little mysterious. Also a little austere, but very kind. Some of the Blair Water and Shrewsbury people thought it was a dull place and outlook for a young girl and said she had been very foolish to refuse Miss Royal's offer of a "position on a magazine" in New York. Throwing away such a good chance to make something of herself! But Emily, who had very clear-cut ideas of what she was going to make of herself, did not think life would be dull at New Moon or that she had lost her chance of Alpine climbing because she had elected to stay there. She belonged by right divine to the Ancient and Noble Order of Story-tellers. Born thousands of years earlier she would have sat in the circle around the fires of the tribe and enchanted her listeners. Born in the foremost files of time she must reach her audience through many artificial mediums. But the materials of story weaving are the same in all ages and all places. Births, deaths, marriages, scandals – these are the only really interesting things in the world. So she settled down very determinedly and happily to her pursuit of fame and fortune – and of something that was neither. For writing, to Emily Byrd Starr, was not primarily a matter of worldly lucre or laurel crown. It was something she had to do. A thing – an idea – whether of beauty or ugliness, tortured her until it was "written out." Humorous and dramatic by instinct, the comedy and tragedy of life enthralled her and demanded expression through her pen. A world of lost but immortal dreams, lying just beyond the drop-curtain of the real, called to her for embodiment and interpretation – called with a voice she could not – dared not – disobey. She was filled with youth's joy in mere existence. Life was forever luring and beckoning her onward. She knew that a hard struggle was before her; she knew that she must constantly offend Blair Water neighbours who would want her to write obituaries for them and who, if she used an unfamiliar word, would say contemptuously that she was "talking big"; she knew there would be rejection slips galore; she knew there would be days when she would feel despairingly that she could not write and that it was of no use to try; days when the editorial phrase, "not necessarily a reflection on its merits," would get on her nerves to such an extent that she would feel like imitating Marie Bashkirtseff and hurling the taunting, ticking, remorseless sitting-room clock out of the window; days when everything she had done or tried to do would slump – become mediocre and despicable; days when she would be tempted to bitter disbelief in her fundamental conviction that there was as much truth in the poetry of life as in the prose; days when the echo of that "random word" of the gods, for which she so avidly listened, would only seem to taunt her with its suggestions of unattainable perfection and loveliness beyond the reach of mortal ear or pen. She knew that Aunt Elizabeth tolerated but never approved her mania for scribbling. In her last two years in Shrewsbury High School Emily, to Aunt Elizabeth's almost incredulous amazement, had actually earned some money by her verses and stories. Hence the toleration. But no Murray had ever done such a thing before. And there was always that sense, which Dame Elizabeth Murray did not like, of being shut out of something. Aunt Elizabeth really resented the fact that Emily had another world, apart from the world of New Moon and Blair Water, a kingdom starry and illimitable, into which she could enter at will and into which not even the most determined and suspicious of aunts could follow her. I really think that if Emily's eyes had not so often seemed to be looking at something dreamy and lovely and secretive Aunt Elizabeth might have had more sympathy with her ambitions. None of us, not even self-sufficing Murrays of New Moon, like to be barred out.

Book Description Paperback. Condition: New. Reprint. Language: English. Brand new Book. Emily knows she's going to be a great writer.She also knows that she and her childhood sweetheart, Teddy Kent, will conquer the world together.But when Teddy leaves home to pursue his goal to become an artist at the School of Design in Montreal, Emily's world collapses.With Teddy gone, Emily agrees to marry a man she doesn't love . as she tries to banish all thoughts of Teddy.In her heart, Emily must search for what being a writer really means.". Seller Inventory # ABZ9780553264937