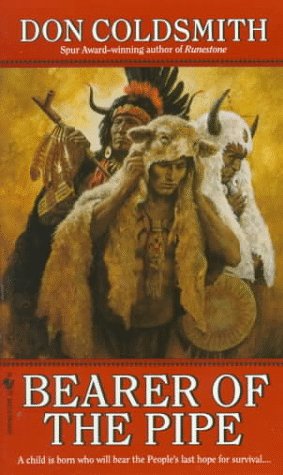 From his auspicious birth, Wolf Pup has demonstrated an instinct for the ways of the wild. Yet it is in the lodge of his grandfather Singing Wolf that he seeks his true calling medicine man and future bearer of the Story Skins, the pipe, and the sacred Spanish bit. But before he can claim his destiny Wolf Pup must undertake a perilous vision quest. He must learn to see through the eyes of the deer, soar with the red-tailed hawk, sit coiled with the snake in the grass. Then a whirlwind of terror, an instant of destruction, will leave his village in ruins and chase the life-giving herds of buffalo across the horizon and beyond the People's reach. Suddenly Wolf Pup discovers that the burden of being Pipe Bearer may require the most profound and painful sacrifice of all.

When Wolf Pup decides to apprentice himself to the People's holy man, guardian of the ancient legends and lore, he little suspects how soon he will have to call on the power of spirit medicine to save his tribe. Another chapter in Coldsmith's immensely popular Spanish Bit saga.

With nearly six million copies of his critically acclaimed Spanish Bit novels in print, Don Coldsmith is one of today's bestselling novelists of the North American frontier.

2. BEARER OF THE PIPE: SPANISH BIT

3. BEARER OF THE PIPE: SPANISH BIT