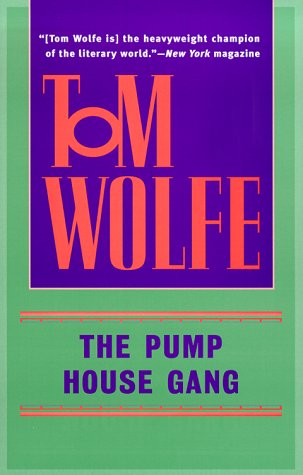 Looking for new forms of status and power, the author travels from La Jolla to London in search of the 1960s subculture's wildest heroes. Reprint.

Our boys never hair out. The black panther has black feet. Black feet on the crumbling black panther. Pan-thuh. Mee-dah. Pam Stacy, 16 years old, a cute girl here in La Jolla, California, with a pair of orange bell-bottom hip-huggers on, sits on a step about four steps down the stairway to the beach and she can see a pair of revolting black feet without lifting her head. So she says it out loud, "The black panther."

Somebody farther down the stairs, one of the boys with the major hair and khaki shorts, says, "The black feet of the black panther."

"Mee-dah," says another kid. This happens to be the cry of a, well, underground society known as the Mac Meda Destruction Company.

All these kids, seventeen of them, members of the Pump House crowd, are lollygagging around the stairs down to Windansea Beach, La Jolla, California, about 11 a.m., and they all look at the black feet, which are a woman's pair of black street shoes, out of which stick a pair of old veiny white ankles, which lead up like a senile cone to a fudge of tallowy, edematous flesh, her thighs, squeezing out of her bathing suit, with old faded yellow bruises on them, which she probably got from running eight feet to catch a bus or something. She is standing with her old work-a-hubby, who has on sandals: you know, a pair of navy-blue anklet socks and these sandals with big, wide, new-smelling tan straps going this way and that, for keeps. Man, they look like orthopedic sandals, if one can imagine that. Obviously, these people come from Tucson or Albuquerque or one of those hincty adobe towns. All these hincty, crumbling black feet come to La Jolla-by-the-sea from the adobe towns for the weekend. They even drive in cars all full of thermos bottles and mayonnaisey sandwiches and some kind of latticework wooden-back support for the old crock who drives and Venetian blinds on the back window.

Nobody says it to the two old crocks directly. God, they must be practically 50 years old. Naturally, they're carrying every piece of garbage imaginable: the folding aluminum chairs, the newspapers, the lending-library book with the clear plastic wrapper on it, the sunglasses, the sun ointment, about a vat of goo--

It is a Mexican standoff. In a Mexican standoff, both parties narrow their eyes and glare but nobody throws a punch. Of course, nobody in the Pump House crowd would ever even jostle these people or say anything right to them; they are too cool for that.

Everybody in the Pump House crowd looks over, even Tom Coman, who is a cool person. Tom Coman, 16 years old, got thrown out of his garage last night. He is sitting up on top of the railing, near the stairs, up over the beach, with his legs apart. Some nice long willowy girl in yellow slacks is standing on the sidewalk but leaning into him with her arms around his body, just resting. Neale Jones, 16, a boy with great lank perfect surfer's hair, is standing nearby with a Band-Aid on his upper lip, where the sun has burnt it raw. Little Vicki Ballard is up on the sidewalk. Her older sister, Liz, is down the stairs by the Pump House itself, a concrete block, 15 feet high, full of machinery for the La Jolla water system. Liz is wearing her great "Liz" styles, a hulking rabbit-fur vest and black-leather boots over her Levi's, even though it is about 85 out here and the sun is plugged in up there like God's own dentist lamp and the Pacific is heaving in with some fair-to-middling surf. Kit Tilden is lollygagging around, and Tom Jones, Connie Carter, Roger Johnson, Sharon Sandquist, Mary Beth White, Rupert Fellows, Glenn Jackson, Dan Watson from San Diego, they are all out here, and everybody takes a look at the panthers.

The old guy, one means, you know, he must be practically 50 years old, he says to his wife, "Come on, let's go farther up," and he takes her by her fat upper arm as if to wheel her around and aim her away from here.

But she says, "No! We have just as much right to be here as they do."

"Mrs. Roberts," the work-a-hubby says, calling his own wife by her official married name, as if to say she took a vow once and his word is law, even if he is not testing it with the blond kids here--"farther up, Mrs. Roberts."

They start to walk up the sidewalk, but one kid won't move his feet, and, oh, god, her work-a-hubby breaks into a terrible shaking Jell-O smile as she steps over them, as if to say, Excuse me, sir, I don't mean to make trouble, please, and don't you and your colleagues rise up and jump me, screaming Gotcha--

But exactly! This beach is verboten for people practically 50 years old. This is a segregated beach. They can look down on Windansea Beach and see nothing but lean tan kids. It is posted "no swimming" (for safety reasons), meaning surfing only. In effect, it is segregated by age. From Los Angeles on down the California coast, this is an era of age segregation. People have always tended to segregate themselves by age, teenagers hanging around with teenagers, old people with old people, like the old men who sit on the benches up near the Bronx Zoo and smoke black cigars. But before, age segregation has gone on within a larger community. Sooner or later during the day everybody has melted back into the old community network that embraces practically everyone, all ages.

But in California today surfers, not to mention rock 'n' roll kids and the hot-rodders or Hair Boys, named for their fanciful pompadours--all sorts of sets of kids--they don't merely hang around together. They establish whole little societies for themselves. In some cases they live with one another for months at a time. The "Sunset Strip" on Sunset Boulevard used to be a kind of Times Square for Hollywood hot dogs of all ages, anyone who wanted to promenade in his version of the high life. Today "The Strip" is almost completely the preserve of kids from about 16 to 25. It is lined with go-go clubs. One of them, a place called It's Boss, is set up for people 16 to 25 and won't let in anybody over 25, and there are some terrible I'm-dying-a-thousand-deaths scenes when a girl comes up with her boyfriend and the guy at the door at It's Boss doesn't think she looks under 25 and tells her she will have to produce some identification proving she is young enough to come in here and live The Strip kind of life and--she's had it, because she can't get up the I.D. and nothing in the world is going to make a woman look stupider than to stand around trying to argue I'm younger than I look, I'm younger than I look. So she practically shrivels up like a Peruvian shrunken head in front of her boyfriend and he trundles her off, looking for some place you can get an old doll like this into. One of the few remaining clubs for "older people," curiously, is the Playboy Club. There are apartment houses for people 20 to 30 only, such as the Sheri Plaza in Hollywood and the E'Questre Inn in Burbank. There are whole suburban housing developments, mostly private developments, where only people over 45 or 50 can buy a house. Whole towns, meantime, have become identified as "young": Venice, Newport Beach, Balboa--or "old": Pasadena, Riverside, Coronado Island.