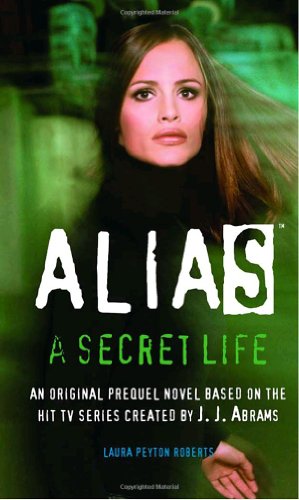 Laura Peyton Roberts is the author of numerous books for young readers. She lives in San Diego, California.

"Why do we have to live in the dorms?" Sydney Bristow complained, lifting her eyes from her Dostoyevsky novel to cast an annoyed glance toward her half-open window. Shouts and laughter tumbled in from outside, riding the warm California breeze. "Freshmen make so much noise."

"In case you've forgotten, we're freshmen," Francie Calfo said, twisting around in her chair to gesture with a wet red nail polish brush. She had long since abandoned her studies and was using her desk as a manicure station. "Not only that, but it's Saturday and it's beautiful outside. Any sane person would be out there making noise." Francie's dark brown eyes turned wistful. "Remind me again: Why aren't we out there?"

"Because of me," Sydney said with a sigh. Tossing her book aside on her thin, dorm-issue mattress, she got up to look out the window.

On the freshly mown grass below, students of all ages and descriptions were enjoying the sunny spring day, sitting and talking in groups or playing impromptu games of touch football and catch. Frisbees crisscrossed the scene, and a giggling gang of sorority girls ran back and forth trying to fly a long, colorful kite. Shorts and tank tops were the uniform of the day, and even from her fifth-floor window, Sydney could smell the suntan lotion.

"You should go do something," she said, turning abruptly to Francie. "There's no reason for you to be a prisoner here just because I have to study. With all the hours I've been working, I have to catch up on my classes, but you . . ."

"What kind of friend would I be if I were out having fun while you were here plowing through . . . what are you reading, anyway?" Francie got up and reached for the book Sydney had dropped, lifting its cover by two wet-tipped fingers. "Is this . . . What is this?"

Sydney froze. Why had she left that book in plain sight?

"Dostoyevsky," she said quickly. "For my Survey of World Literature class. Everyone has to read it."

She hurried to take the book back, but Francie yanked it out of her reach, arching a disbelieving brow. "In Russian? This is Russian?"

"I don't want to shock you, Syd, but most lit teachers are fine with students who read the English translation. When did you learn Russian, anyway?"

At least that part was true.

Francie dropped the book onto Sydney's bed. "I hope you know you're crazy. Between your classes and working at the bank, you don't have enough to do already?"

Sydney smiled weakly, at a loss for an answer.

The worst part is the lying, she thought. They don't tell you that when you join the CIA. You think the worst part will be the fear, or getting caught, or maybe even dying. But the lying . . . the lying is every day.

"You're my best friend here, Francie," she blurted out. "You always will be, right?"

Francie laughed, caught off guard. "I haven't put up with you since last summer just to have you replace me now."

"Never. There's nothing I wouldn't do for you," Sydney said sincerely.

"Except for go outside on a perfectly gorgeous day." Francie pointed hopefully toward the window. "Forget about studying, Syd! Why do we live in L.A. if we never go to the beach?"

"That was before I bought a new bathing suit. And there's a party tonight at Delt house. I heard some girls talking in the hall."

"A frat party?" Sydney had been to one of those parties early in the year. She had drunk too much and had promptly gotten sick. Since then she'd concluded two things: She definitely wasn't a party girl, and frat boys could be downright disgusting. "Way to talk me into the beach!"

"Really? You'll go?" Francie began waving her hands around, suddenly frantic to dry her red polish. "We can stop by the commons and pick up some sandwiches. And I'll bet I can borrow some beach chairs. I'm pretty sure--"

The pager on Sydney's waistband went off.

"Oh, that is not the bank!" Francie exclaimed as Sydney tilted the pager to read the message on its small screen: Wilson.

"But it's Saturday!" Francie protested. "Banks aren't even open on Saturday!"

Sydney gave her an apologetic shrug. "Mine is."

"You have to quit that job! You've only been there a few months and they're already running your life."

"It's probably just some filing," said Sydney, lying again. "Go to the beach without me. If I can get off early, I'll meet you there."

Francie flopped down hard on her bed, disappointed. "You always say you'll get off, but you never do."

"I'll really try this time. But if not, then tonight. All right? I'll definitely be back in time for the party."

"Only if it makes you very, very happy. You know those frat guys will be drunk and drooling all over us."

Francie smiled, a mischievous glint in her eyes. "I know."

The downtown street was deserted when Sydney drove her white Mustang into the secure parking garage beneath the Credit Dauphine building. She checked her reflection in the driver's window as she locked the car door: minimal makeup, straight brown hair slicked into a long ponytail, a slightly caught-in-the-headlights look about her brown eyes that she was learning to recognize as excitement. She didn't like lying about her new job, but there was no denying that being an agent-in-training with the CIA was the most exciting thing she'd ever done--not to mention the most important.

As Sydney stepped into the special elevator that would take her to bank sublevel six, hidden headquarters of her true employer, she felt her pulse surge the way it always did when she came to work. If she made it through training, she'd be a spy for a covert branch of the CIA known as SD-6, a full-fledged secret agent dedicated to protecting the United States against all enemies, foreign and domestic. It was an awesome responsibility--and one she was glad to take on. She'd been waiting all her life for a chance to make a difference.

The elevator doors opened and Sydney stepped into a different world. The entrance to SD-6 was a small white room with a single black circle painted on its floor. Sydney strode to the center of the circle, straightened to her full height, and stared directly ahead. Retinal scanning verified her clearance, and a second set of doors opened automatically, admitting her to the main work area.

Raw concrete walls and high dark ceilings gave headquarters a cavelike quality, an impression reinforced by the absence of windows. Fluorescent lights were suspended overhead, but the more interesting illumination came from row upon row of glowing computer monitors on identical nondescript desks.

One of these desks will be mine someday, Sydney thought proudly as she walked past them.

But for now, a scattering of agents she didn't know sat working on projects she wasn't cleared for, keeping the country safe.

Book Description Condition: New. It?s Sydney Bristow?s first mission?"in Paris. Her first alias. Her first real enemy. Her first real crush. And her first big mistake. There are a lot of firsts for Sydney. But no second chances. Seller Inventory # 9780553493993