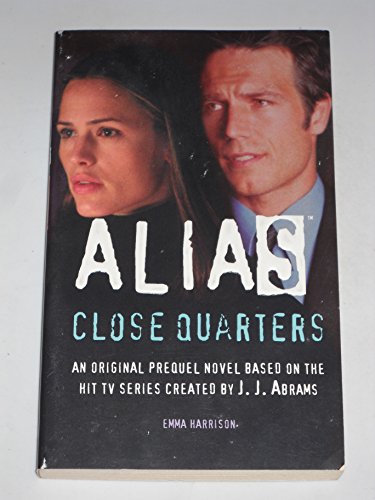 Keeping tabs on Marianna, the daughter of Italy’s president, isn’t the type of assignment Michael Vaughn was expecting. He’s a newly minted CIA officer—not a babysitter.

Never mind that there’s a plot to assassinate Marianna’s father. Or that she’s incredibly beautiful. Or that ditching her security detail makes her laugh.

Political assassins are no laughing matter.

And neither are gorgeous girls undercover.

Emma Harrison has written many novels for teens including installments in the Charmed TV series and the upcoming Charlie’s Angels sequel, Full Throttle.

1
Michael Vaughn would never have admitted it, but sometimes he still felt beyond cool when he walked into Central Intelligence Agency headquarters. He'd step across the CIA seal on the floor in the center of the lobby, his head held a bit higher than usual, a casual smile on his chiseled face, and think, Check me out. I'm a CIA agent. Yeah, that's right, I'm a badass.

Then he'd laugh at himself and try to keep a straight face until he got past security.

This wasn't CIA agent behavior, he knew. It wasn't even adult behavior. But he couldn't help it. It had started back when he'd reported for training at the Farm. That first day it had hit him: He was finally fulfilling his lifelong dream to be one of the good guys, to protect the United States and its citizens from all threats, foreign or domestic. That day he'd gotten a sort of adrenaline-fueled thrill. And now, more than a year later, he still felt it. He was cool. James Bond cool. Han Solo cool. He was the guy every other guy wished he could be.

On this warm spring day, Vaughn was feeling his cool factor more intensely than usual. He and his new partner, Chloe Murphy, had just returned from a mission in the Middle East--a dangerous, confidential, top-priority mission--and they had returned home triumphant. Not only had they taken out a powerful terrorist cell, but they had secured two warehouses full of illegal weapons. This morning, Vaughn was feeling good. He was feeling like a hero.

Chloe had been one of his fellow trainees at the Farm. After his first partner, Akiko Schwartz, had opted for a desk job at the CIA's Center for Families, he'd been reassigned to team with Chloe, a baby-faced wunderkind with a Ph.D. in linguistics who'd just come back from a stint in Paris.

He nodded to Rufus and Tom, the two guards outside the secure room that led to the Outer Rim at CIA headquarters. The Outer Rim was the nickname the agents had given to the long, white hallway that surrounded the offices of the CIA. Vaughn placed his palm on the handprint scanner in the secure room and waited as a beam of light illuminated his skin. His picture appeared on the security screen along with his clearance code and status: active.

The voice-recognition computer beeped its approval. The glass door in front of Vaughn slid open, and he stepped into the Outer Rim. Brightly lit and deathly quiet, the Rim smelled of antiseptic cleaner that always reminded Vaughn of hospitals. He walked across the gleaming linoleum floor and stood before the door to the bullpen-style office within. As always, he strained not to blink as the red laser for the retinal scan slid over his eyeball. Finally the steel door before him unlocked, and Vaughn pushed his way inside.

The office, as always, was buzzing with activity. People rushed around carrying files, talking into headsets. Three senior agents huddled over a flat-screen monitor, urgently whispering over some new intel. Phones trilled and printers whined. Vaughn headed for the far side of the room, where he and his fellow junior agents sat in a cluster of six desks, set up so that each agent faced his or her partner. Chloe was already at her desk, her long brown hair held back in a messy bun with two pencils. She sipped a huge cup of coffee, her eyes trained on her monitor.

Chloe glanced up and smiled, her hazel eyes glittering. "We are so money right now."

Chloe spotted someone over his shoulder and lifted her chin with a smile.

"Vaughn, my man!" Agent Chris Seale called out, holding up his hand to slap palms with Vaughn. Chris was a former Penn State linebacker--a guy whose body always seemed to be straining to break free from his pressed shirts and too-tight ties. Vaughn stood up to give him a high five, and Chris almost knocked him off his feet.

"It's all over the office," Chris said, sitting down at his desk next to Vaughn's, his huge form practically overflowing from the chair.

Vaughn scratched at the back of his scruffy light brown hair, grinning with pride. This was exactly how he'd pictured it all the way home on the long flight from Cairo to Paris to Boston to D.C. Back-slapping, congratulations, general adulation. He was sure his and Chloe's success in the Middle East was going to land them a prime assignment their next time out. Something even bigger, even more treacherous and significant. He couldn't wait to find out what it would be.

"Hey, Vaughn, Murphy. Betty wants to see you in her office," Jordan Patel, another of their peers, told them as he dropped into his own chair. He barely glanced at the other agents before firing up his computer. No "Welcome home." No "Good job." Not that Vaughn was surprised. Patel was one of those people who couldn't stand it when others succeeded--even if they were all on the same team.

Vaughn met Chloe's gaze as they stood up, and he could tell she was as excited as he was to talk to their boss. This was it. Betty was sure to reward their success with a fabulous assignment.

"What do you think it'll be?" Chloe asked under her breath as she fell into step next to Vaughn. They wound their way around the clusters of desks, acknowledging a few more congratulations as they went.

He held open the door to Betty Harlow's office for Chloe. As they stepped into the soundproof room, Betty reached for her cane, using it to help push herself up from her chair. Betty had been in charge of training at the Farm when Vaughn and Chloe were there learning the skills that would turn them into ace officers. Back then they had been petrified of her. They were still scared, in fact, but to a lesser degree. Betty reminded Vaughn of an aging folk singer, with long graying brown hair and a no-nonsense attitude. She was in charge, and everyone around her knew it by her very presence. But after everything Vaughn had been through with her, he'd grown to respect and admire her--even if that one heavy-lidded eye still appeared in his nightmares now and then.

"Nice work in the desert," Betty said, nodding to the visitors' chairs across from her.

"Thank you, ma'am," Vaughn and Chloe said in unison before perching on the edge of their seats.

Betty lowered herself into her chair again and passed them each a folder marked confidential. Vaughn glanced at Chloe and felt his pulse speed up the way it always did the moment before they discovered what their next quest would be.

"I'm sending both of you to New York," Betty told them.