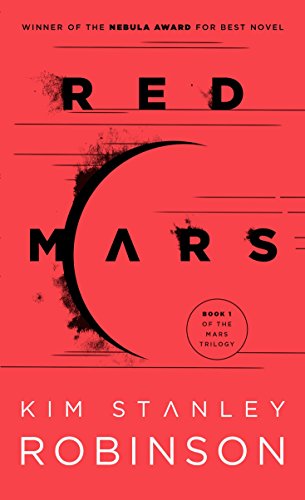 Winner of the Nebula Award for Best Novel · Discover the novel that launched one of science fiction’s most beloved, acclaimed, and awarded trilogies: Kim Stanley Robinson’s masterly near-future chronicle of interplanetary colonization.

For centuries, the barren, desolate landscape of the red planet has beckoned to humankind. Now a group of one hundred colonists begins a mission whose ultimate goal is to transform Mars into a more Earthlike planet. They will place giant satellite mirrors in Martian orbit to reflect light to the surface. Black dust sprinkled on the polar caps will capture warmth and melt the ice. And massive tunnels drilled into the mantle will create stupendous vents of hot gases. But despite these ambitious goals, there are some who would fight to the death to prevent Mars from ever being changed.

“A staggering book . . . the best novel on the colonization of Mars that has ever been written.”—Arthur C. Clarke

Red Mars opens with a tragic murder, an event that becomes the focal point for the surviving characters and the turning point in a long intrigue that pits idealistic Mars colonists against a desperately overpopulated Earth, radical political groups of all stripes against each other, and the interests of transnational corporations against the dreams of the pioneers.

This is a vast book: a chronicle of the exploration of Mars with some of the most engaging, vivid, and human characters in recent science fiction. Robinson fantasizes brilliantly about the science of terraforming a hostile world, analyzes the socio-economic forces that propel and attempt to control real interplanetary colonization, and imagines the diverse reactions that humanity would have to the dead, red planet.

Red Mars is so magnificent a story, you will want to move on to Blue Mars and Green Mars. But this first, most beautiful book is definitely the best of the three. Readers new to Robinson may want to follow up with some other books that take place in the colonized solar system of the future: either his earlier (less polished but more carefree) The Memory of Whiteness and Icehenge, or 1998's Antarctica. --L. Blunt Jackson

"The best tale of space colonization--a lyrical, beautiful, accurate legend of the future by one of the best writers of our time."--David Brin

Shipping: US$ 7.87
From United Kingdom to U.S.A.
Destination, rates & speeds