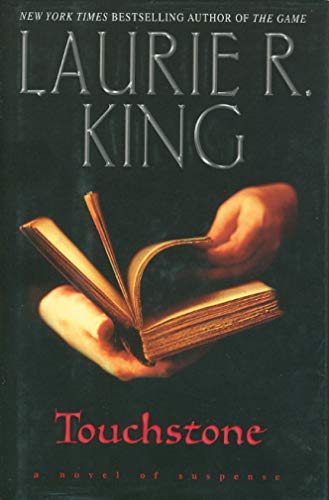 Hailed for her rich and powerful works of psychological suspense as well as her New York Times bestselling mysteries, Laurie R. King now takes us to a remote cottage in Cornwall where a gripping tale of intrigue, terrorism, and explosive passions begins with a visit to a recluse upon whom the fate of an entire nation may rest—a man code-named . . .

It’s eight years after the Great War shattered Bennett Grey’s life, leaving him with an excruciating sensitivity to the potential of human violence, and making social contact all but impossible. Once studied by British intelligence for his unique abilities, Grey has withdrawn from a rapidly changing world—until an American Bureau of Investigation agent comes to investigate for himself Grey’s potential as a weapon in a vicious new kind of warfare. Agent Harris Stuyvesant desperately needs Grey’s help entering a world where the rich and the radical exist side by side—a heady mix of the powerful and the celebrated, among whom lurks an enemy ready to strike a deadly blow at democracy on both sides of the Atlantic.

Here, among a titled family whose servants dress in whimsical costumes and whose daughter conducts an open affair with a man who wants to bring down the government, Stuyvesant finds himself dangerously seduced by one woman and—even more dangerously—falling in love with another. And as he sifts through secrets divulged and kept, he uncovers the target of a horrifying conspiracy, and wonders if he can trust his touchstone, Grey, to reveal the most dangerous player of all ....

Building to an astounding climax on an ancient English estate, Touchstone is both a harrowing thriller by a master of the genre and a thought-provoking exploration of the forces that drive history—and human destinies.

With a glance, Bennett Grey can read people's true feelings. With a touch, uncover their darkest secrets. His unwanted talent has driven him to the edge of madness and to a remote cottage in Cornwall where he lives in virtual seclusion -- until FBI agent Harris Styvesant entices him to help him diffuse a terrorist plot that could rip the world apart.

In the aftermath of the Great War, with the democracies on both sides of the Atlantic threatened from within by agitators and anarchists, Stuyvesant has only one very unpredictable weapon to stop the inevitable countdown to a deadly plot -- Grey: the touchstone.

Book Description Bantam, 2007. Soft cover. Condition: New. Dust Jacket Condition: No Dust Jacket. First Edition. Advance Reading Copy published prior to the first edition from uncorrected galley proofs, for the use of reviewers and critics, and as a final editorial copy. There may be slight differences between the text in this book and the text as ultimately published. ; Trade PB. Seller Inventory # 12348