Items related to The Nazis: A Warning from History

Laurence Rees The Nazis: A Warning from History

The Nazis: A Warning from History 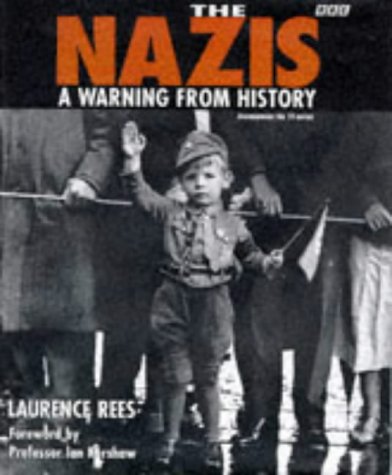 Published in conjunction with the History Channel and the BBC, this prizewinning volume, now back in print, contains previously unpublished material and photographs documenting the reality of life under Nazi rule and the evolution of the ruthless slaughter of millions of people in Germany.

In this handsome edition, BBC producer and renowned historian Laurence Rees has collected the testimonies of more than fifty eyewitnesses, many of whom were committed Nazis, free to tell their stories only after the fall of the Berlin Wall. Rees offers us the compelling voices of soldiers and civilians rarely heard from—including a remorseless Lithuanian soldier who shot five hundred people and then went out to lunch, and the anguished older sister of a ten-year-old developmentally disabled boy selected for “immunization injection” (a fatal dose of morphine) at a children’s hospital. These materials cast a harsh new light on the rise and fall of the Third Reich.

For this History channel tie-in book, Laurence Rees interviewed more than 50 people who were active participants of the Nazi regime. Galvanized by the unilateral collapse of Communism in Eastern Europe, the subjects are now free to relate their harrowing tales. One, a Lithuanian soldier, candidly recalls his vicious crimes against humanity, in service to the Nazis. Civilians--rarely heard from until now--also tell their side of the story. Popular myth says that the civilians were victims to the Nazi spell, but instead the interviews reveal the depth of German complicity with Nazi policy. As Rees writes, it wasn't just the "quasi-divine" character of Hitler that hypnotized an entire population, "there was massive voluntary collaboration with the Nazi regime." Germany's erratic state of democracy allowed Hitler and the Nazis to open a gateway into power, as did a German populace still reeling from the "unjust" surrender and humiliating terms of defeat at the end of the First World War that gave focus and justification to their enmity. Rees's painstaking work may not be comfortable reading, but in today's hot political climate--in areas like the former Yugoslavia and the fragile state of Russia--the message echoes with significance. --Jeremy Storey

Laurence Rees, writer and producer of the BBC television series The Nazis, is the creative director of history programs for BBC Television. He lives in London.

1. The Nazis: A Warning from History Rees, Laurence

2. The Nazis: A Warning from History