Items related to Chronicle of the Guayaki Indians

Chronicle of the Guayaki Indians 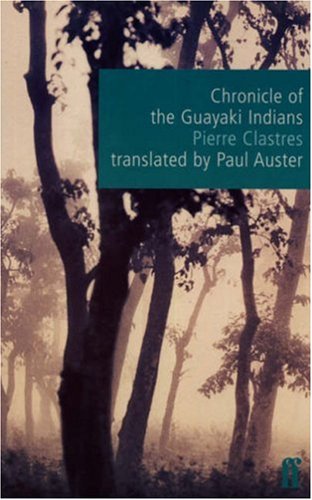 In the 1960s the anthropologist Pierre Clastres spent a year with a so-called "savage" tribe of Indians in Paraguay. This is his account of that experience, describing the tribe's daily life and habits, ritual and cosmology - and the anger which caused them to start murdering their own children.

In the early 1960s, the French anthropologist Pierre Clastres spent two years living among the Guayaki people of Paraguay, a tiny community of nomadic hunters whose way of life was quickly disappearing. When Clastres arrived in Paraguay, there were only 100 Guayaki left, and their culture seemed doomed by influenza and encroaching civilization. Clastres's description of his encounters with these people is respectful, self-aware, and written with great skill. Paul Auster (author of The New York Trilogy and the movie Smoke) translated the book from French to English in the late 1970s, sent it to a publisher, and then lost track of the manuscript for 20 years. Fortunately, one of Auster's fans stumbled upon the manuscript in a used-book store in 1996 and brought it to the author, making this publication possible.

According to Clastres, the Guayaki were mild-mannered folk who relished the taste of human flesh. There were far more men than women in the community, which seems sort of sinister. Every June, when the air was cold enough to make the bees logy, all the Guayaki groups gathered for a honey festival, which featured tickling games and many sexual adventures. In short, the Guayaki led lives very different from our own. There is something deeply satisfying about learning the details of faraway, drastically foreign lives. Clastres manages to describe these people's daily lives and traditions without making them seem exotic or sensationalizing their story. Clastres's quiet, detailed observations honor this vanished culture and should be of interest to anthropologists and layman alike. --Jill Marquis

Chronicle of the Guayaki Indians is Pierre Clastres's account of his 1963-64 encounter with this small Paraguayan tribe, a precise and detailed recording of the history, ritual, myths, and culture of this remarkably unique, and now vanished, people. "Determined not to let the slightest detail" escape him or to leave unanswered the many questions prompted by his personal experiences. Clastres follows the Guayakis in their everyday lives.

1. Chronicle of the Guayaki Indians

2. Chronicle of the Guayaki Indians Clastres, Pierre and Auster, Paul