Items related to Birds of America 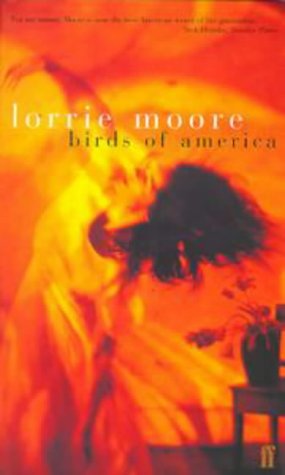 A long-awaited collection of stories--twelve in all--by one of the most exciting writers at work today, the acclaimed author of Who Will Run the Frog Hospital? and Self-Help. Stories remarkable in their range, emotional force, and dark laughter, and in the sheer beauty and power of their language.
From the opening story, "Willing"--about a second-rate movie actress in her thirties who has moved back to Chicago, where she makes a seedy motel room her home and becomes involved with a mechanic who has not the least idea of who she is as a human being--Birds of America unfolds a startlingly brilliant series of portraits of the unhinged, the lost, the unsettled of our America.
In the story "Which Is More Than I Can Say About Some People" ("There is nothing as complex in the world--no flower or stone--as a single hello from a human being"), a woman newly separated from her husband is on a long-planned trip through Ireland with her mother. When they set out on an expedition to kiss the Blarney Stone, the image of wisdom and success that her mother has always put forth slips away to reveal the panicky woman she really is.
In "Charades," a family game at Christmas is transformed into a hilarious and insightful (and fundamentally upsetting) revelation of crumbling family ties.
In "Community Life,"a shy, almost reclusive, librarian, Transylvania-born and Vermont-bred, moves in with her boyfriend, the local anarchist in a small university town, and all hell breaks loose. And in "Four Calling Birds, Three French Hens," a woman who goes through the stages of grief as she mourns the death of her cat (Anger, Denial, Bargaining, Häagen Dazs, Rage) is seen by her friends as really mourning other issues: the impending death of her parents, the son she never had, Bosnia.
In what may be her most stunning book yet, Lorrie Moore explores the personal and the universal, the idiosyncratic and the mundane, with all the wit, brio, and verve that have made her one of the best storytellers of our time.

Lorrie Moore made her debut in 1985 with Self-Help, which proved that she could write about sadness, sex, and the single girl with as much tenderness--and with considerably more wit--than almost any of her contemporaries. She followed this story collection with another, Like Life, as well as two fine novels, Anagrams and Who Will Run the Frog Hospital? Yet Moore's rapid-fire alternation of mirth and deep melancholy is so perfectly suited to the short form that readers will greet Birds of America with an audible sigh of relief--and delight. In "Willing," for example, a second-rate Hollywood starlet retreats into a first-rate depression, taking shelter in a Chicago-area Days Inn. The author's eye for the small comic detail is intact: her juice-bar-loving heroine initially drowns her sorrows in "places called I Love Juicy or Orange-U-Sweet." Yet Moore seldom satisfies herself with mere pop-cultural mockery. She's too interested in the small and large devastations of life, which her actress is experiencing in spades. "Walter leaned her against his parked car," Moore relates. "His mouth was slightly lopsided, paisley-shaped, his lips anneloid and full, and he kissed her hard. There was something numb and on hold in her. There were small dark pits of annihilation she discovered in her heart, in the loosening fist of it, and she threw herself into them, falling." Elsewhere, the author serves up a similar mixture of one-liners and contemporary grief, lamenting the death of a housecat in "Four Calling Birds, Three French Hens" and the death of a marriage in "Which Is More Than I Can Say About That." And her hilarious account of a nuclear family undergoing a meltdown in "Charades" will make you want to avoid parlor games for the rest of your natural life. --James Marcus

"Fluid, cracked, mordant, colloquial, Moore's sentences hold, even startle.... Her most potent work so far...[it] will stand by itself as one of our funniest, most telling anatomies of human love and vulnerability." --James McManus, The New York Times Book Review

"A marvelous collection, deeper than anything Moore has written and yet underscored by that trademark humor in the face of familiar awfulness. Her stories are tough, lean, funny, and metaphysical.... Birds of America has about it a wild beauty that simply makes one feel more connected to life." --Gail Caldwell, The Boston Globe

"At once sad, funny, lyrical and prickly, Birds of America attests to the deepening emotional chiaroscuro of her wise and beguiling work." --Michiko Kakutani, The New York Times

Shipping: US$ 18.83
From United Kingdom to U.S.A.
Destination, rates & speeds