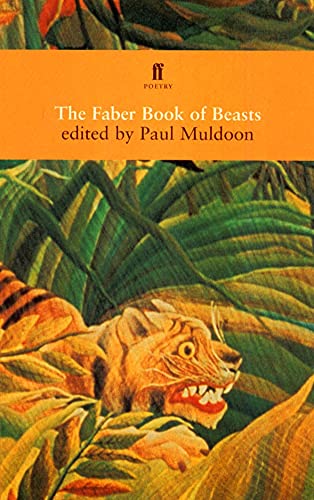 An anthology of poems about creatures of many kinds, including some perhaps more fanciful than real. The poets range from Homer to the present.

Paul Muldoon was born in County Armagh in 1951. He read English at Queen's University, Belfast, and published his first collection of poems, New Weather, in 1973. He is the author of ten books of poetry, including Moy Sand and Gravel (2002), for which he received the Pulitzer Prize for Poetry, and Horse Latitudes (2006). Since 1987 he has lived in the United States, where he is the Howard G. B. Clark Professor in the Humanities at Princeton University. From 1999 to 2004 he was Professor of Poetry at Oxford University. A Fellow of the Royal Society of Literature, Paul Muldoon was given an American Academy of Arts and Letters award in 1996. Other recent awards include the 1994 T. S. Eliot Prize, the 1997 Irish Times Poetry Prize, and the 2003 Griffin Prize.

2. The Faber Book of Beasts (Paperback)

Book Description FABER & FABER, United Kingdom, 1998. Paperback. Condition: New. Main. Language: English. Brand new Book. 'The Faber Book of Beasts is a generous and intelligent round- up of old favourites, new juxtapositions, and poems we mightn't know about . Will set heads shaking, as well as nodding with pleasure.' Independent William Wordsworth's 'To a Skylark'W.B. Yeats' 'Leda and the Swan'Elizabeth Bishop's 'The Moose'D.H. Lawrence's 'Bat'Marianne Moore's 'Elephants'William Blake's 'The Tyger' Gerard Manley Hopkins' 'The Windhover'Thom Gunn's 'The Snail'Seamus Heaney's 'Otter'John Donne's 'The Flea'Christopher Smart's 'My Cat Jeoffry''Baa Baa Black Sheep' From childhood rhymes to canonical classics, Homer to Ted Hughes, this eclectic poetry anthology celebrating the earth's creatures brims with beastly delights. Celebrated poet Paul Muldoon's bestiary shows that we are 'most human in the presence of animals', whether tame or wild, common or exotic, mammals or reptiles, real or imaginary - and the result is a must-read for animal-lovers of all ages everywhere.'Animals bring the best out in us [and make] the best art . Elephants, skunks, otters, hedgehogs and hippos feature in Muldoon's menagerie; how charming it is to observe how they nuzzle along together in his engaging anthology.' Irish Times. Seller Inventory # AA99780571195473

3. The Faber Book of Beasts

6. The Faber Book of Beasts

7. The Faber Book of Beasts

9. The Faber Book of Beasts

10. The Faber Book of Beasts