Items related to Wit: A Play 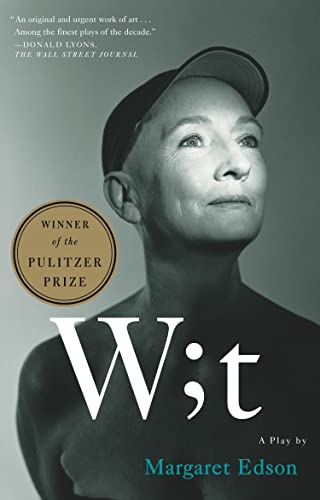 Margaret Edson's powerfully imagined Pulitzer Prize–winning play examines what makes life worth living through her exploration of one of existence's unifying experiences―mortality―while she also probes the vital importance of human relationships. What we as her audience take away from this remarkable drama is a keener sense that, while death is real and unavoidable, our lives are ours to cherish or throw away―a lesson that can be both uplifting and redemptive. As the playwright herself puts it, "The play is not about doctors or even about cancer. It's about kindness, but it shows arrogance. It's about compassion, but it shows insensitivity."

In Wit, Edson delves into timeless questions with no final answers: How should we live our lives knowing that we will die? Is the way we live our lives and interact with others more important than what we achieve materially, professionally, or intellectually? How does language figure into our lives? Can science and art help us conquer death, or our fear of it? What will seem most important to each of us about life as that life comes to an end?

The immediacy of the presentation, and the clarity and elegance of Edson's writing, make this sophisticated, multilayered play accessible to almost any interested reader.

As the play begins, Vivian Bearing, a renowned professor of English who has
spent years studying and teaching the intricate, difficult Holy Sonnets of the
seventeenth-century poet John Donne, is diagnosed with advanced ovarian cancer. Confident of her ability to stay in control of events, she brings to her illness the same intensely rational and painstakingly methodical approach that has guided her stellar academic career. But as her disease and its excruciatingly painful treatment inexorably progress, she begins to question the single-minded values and standards that have always directed her, finally coming to understand the aspects of life that make it truly worth living.

Wit is that rare beast: art that engages both the heart and the mind. "It is not my intention to give away the plot," Vivian Bearing, Ph.D., announces near the beginning of Margaret Edson's Pulitzer Prize-winning play, "but I think I die at the end. They've given me less than two hours." For two hours, this famed Donne scholar takes center stage, interrupting her doctors, nurses, and students to explicate her own story, its metaphors and conceits. Recently diagnosed with late-stage ovarian cancer, she is being treated with an experimental drug cocktail administered in "eight cycles. Eight neat little strophes." The chemo makes her feel worse than she ever thought possible; in fact, the treatment is making her sick, not the disease--an irony she says she'd appreciate in a Donne sonnet, if not so much in life.

Throughout, Vivian finds, the doctors study and discuss her body like a text: "Once I did the teaching, now I am taught. This is much easier. I just hold still and look cancerous. It requires less acting every time." As her time draws to a close, a sea change begins to work in the way Vivian thinks about life, death, and indeed, Donne. His complex, tightly knotted poems have always been a puzzle for her formidable intellect, a chance to display "verbal swordplay" and wit. Her sickness presents an entirely different challenge. A powerful, prickly personality, capable of dry asides even during a bout of gut-wrenching nausea ("You may remark that my vocabulary has taken a turn for the Anglo-Saxon"), Vivian develops a new appreciation for the simple, the maudlin, the kind. Not to give away the plot, but the final moments in Margaret Edson's debut are as wrenching--as human--as anything in recent drama. --Mary Park