Items related to Mr Lear: A Life of Art and Nonsense

Uglow, Jenny Mr Lear: A Life of Art and Nonsense

Mr Lear: A Life of Art and Nonsense 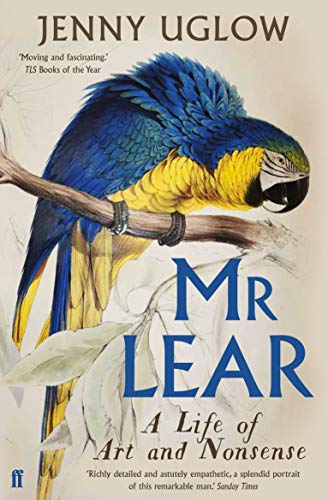 Acclaimed historian Jenny Uglow brings us a fascinating and beautifully illustrated biography of Edward Lear, shortlisted for Waterstone’s Book of the Year, and a Telegraph and Spectator Book of the Year. A scrupulously forensic literary appreciation of Edward Lear and his 'nonsenses' by one of our most cherished historians – without losing any sense of fun. Edward Lear’s poems follow and break the rules. They abide by the logic of syntax, the linking of rhyme and the dance of rhythm, and these "nonsenses" are full of joy – yet set against darkness. Where do these human-like animals and birds and these odd adventures – some gentle, some violent, some musical, some wild – come from? His many drawings that accompany his verse are almost hyper-real, as if he wants to free the creatures from the page. They exist nowhere else in literature, springing only from Lear’s imagination.

Lear lived all his life on the borders of rules and structures, of disciplines and desires. He vowed to ignore politics yet trembled with passionate sympathies. He depended on patrons and moved in establishment circles, yet he never belonged among them and mocked imperial attitudes. He loved men yet dreamed of marriage – but remained, it seems, celibate, wrapped in himself. Even in his family he was marginal, at once accepted and rejected. Surrounded by friends, he was alone.

If we follow him across land and sea – to Italy, Greece and Albania, to The Levant and Egypt and India – and to the borderlands of spirit and self, art and desire, can we see, in the end, if the nonsense makes sense? This is what Jenny Uglow has set sail to find out.

Jenny Uglow 's books include prize-winning biographies of Elizabeth Gaskell, William Hogarth and Sarah Losh. The Lunar Men , published in 2002, was described by Richard Holmes as 'an extraordinarily gripping account', while Nature's Engraver: A Life of Thomas Bewick , won the National Arts Writers Award and A Gambling Man: Charles II and the Restoration was shortlisted for the Samuel Johnson Prize. Her most recent book is In These Times: Living in Britain through Napoleon’s Wars, 1793–1815 . She lives in Canterbury.

"A splendid portrait of this remarkable man." ―SundayTimes

"A wonderfully sharp and sympathetic biography."―Mail on Sunday

"Jenny Uglow has written a great life about an artist with half a life, a biography that might break your heart."― Robert McCrum, Observer

"Jenny Uglow, Edward Lear’s most sensitive biographer to date, does him proud."― A. N.Wilson, Literary Review

2. Mr Lear: A Life of Art and Nonsense (Paperback)

Book Description FABER & FABER, United Kingdom, 2019. Paperback. Condition: New. Main. Language: English. Brand new Book. A Daily Telegraph, Times, Evening Standard, TLS and Spectator Book of the Year.Winner of the Hawthornden Prize.Edward Lear is well-loved for his 'nonsenses', from joyous limericks to great love songs, and for his wonderful natural history paintings, landscapes and travel writing. But although Lear belongs to the age of Darwin and Dickens, his genius for the absurd and his dazzling word-play make him a very modern spirit. He was also a man of great simplicity and charm - children loved him - yet his humour masked epilepsy, depression and loneliness. Jenny Uglow's beautifully illustrated biography brings us his swooping moods, passionate friendships and restless travels. Above all it shows how this uniquely gifted man lived all his life on the boundaries of disciplines and desires - an exile of the heart. Seller Inventory # AA99780571269556

Book Description 2019. Paperback. Condition: New. Paperback. Edward Lear's poems follow and break the rules. They abide by the logic of syntax, the linking of rhyme and the dance of rhythm, and these 'nonsenses' are full of joy - yet set against dar.Shipping may be from multiple locations in the US or from the UK, depending on stock availability. 656 pages. 0.560. Seller Inventory # 9780571269556

7. Mr Lear: A Life of Art and Nonsense

8. Mr Lear: A Life of Art and Nonsense

9. Mr Lear: A Life of Art and Nonsense

Shipping: US$ 18.01
From United Kingdom to U.S.A.
Destination, rates & speeds