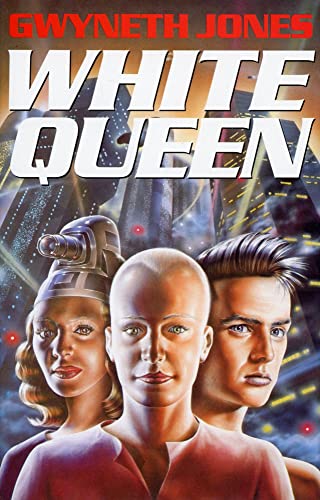 Winner of the first James Tiptree, Jr.. Memorial Award for SF about gender issues, White Queen is a dazzling vision of an out-of-control future from the author of Divine Endurance.

It's 2038. Japan has been destroyed by geologic catastrophe. The global economy is in chaos. And Johnny Guglioli, a young wirehead cyberjournalist infected with a very deadly computer virus, follows the trail of a group of extraterrestrials who have landed somewhere in West Africa.

But when Johnny finally finds the aliens, they're far different from anything he could have imagined: Mysterious. Telepathic. Nearly immortal. And driven by a dark imperative that may cost humanity its future.

It's 2038 and the earth has been devastated by tectonic shifts accompanied by earthquakes and volcanic eruptions. The U.S. has undergone a socialist revolution, retro-viruses are rampant and most technology relies on a powerful organic "clay" instead of microprocessors. When aliens land near American-exile Johnny Guglio's adopted African home, Braemar Wilson, a cutthroat reporter, befriends him to get a jump on the story. Though no one knows the alien's intent, White Queen, an anti-alien group, begins working to undermine human trust. Even as ambassadors from both worlds talk, Braemar and Johnny must work together find themselves in a unique position to uncover the truth. The book won the 1991 James Tiptree Jr. Award.

Gwyneth Jones lives in Brighton with her husband and son. She won the Arthur C. Clarke Award for BOLD AS LOVE; CASTLES MADE OF SAND was shortlisted for the British Science Fiction Award. She is the previous winner of the James Tiptree Memorial Award and two World Fantasy Awards; four of her previous books have been shortlisted for the Arthur C. Clarke Award.

Book Description Gollancz, 1991. Condition: Good. Former Library book. Shows some signs of wear, and may have some markings on the inside. 1st edition. SIGNED. Three people - a journalist w. Seller Inventory # GRP114749604