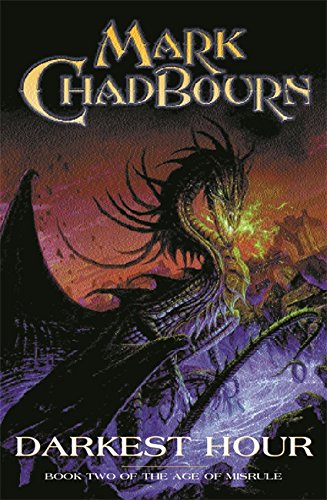 The Eternal Conflict between the Light and Dark once again blackens the skies and blights the land. On one side stand the Tuatha de Danaan, golden-skinned and beautiful, filled with all the might of angels. On the other are the Fomorii, monstrous devils hell-bent on destroying all human existence. And in the middle are the Brothers and Sisters of Dragons, determined to use the strange power that binds them to the land in a last, desperate attempt to save the human race. Church, Ruth, Ryan, Laura and Shavi have joined forces with Tom, a hero from the mists of time, to wage a guerrilla war against the iron rule of the gods. But they didn't count on things going from bad to worse ...Darkest Hour is the stunning continuation of a powerful fantasy saga by one of Britain's most acclaimed young writers.

Mark Chadbourne has been a reporter for regional and national newspapers, as well as running an independent record company.

"Chadbourn's sequel to World's End embellishes the richness of Celtic mythology while turning the modern world on its head. Appealing characters and vivid storytelling make this a good choice for readers of Celtic-laced fantasy." -- Library Journal, June 16, 2009 "The stakes are raised, the hope for success smaller. Chadbourn raises the bar with strong story-telling and a vision of apocalypse where the good guys can fail to do the right things, and fail to succeed -for as good as World's End was, Darkest Hour is better." -- Sacramento Book Review, Vol. 1, Issue 12, August 2009

Book Description Gollancz, 2000. Hardcover. Condition: Good. Connecting readers with great books since 1972. Used books may not include companion materials, some shelf wear, may contain highlighting/notes, may not include cdrom or access codes. Customer service is our top priority!. Seller Inventory # S_276993720

Book Description Gollancz, 2000. Condition: Good. A+ Customer service! Satisfaction Guaranteed! Book is in Used-Good condition. Pages and cover are clean and intact. Used items may not include supplementary materials such as CDs or access codes. May show signs of minor shelf wear and contain limited notes and highlighting. Seller Inventory # 0575066814-2-4

5. Darkest Hour - Book Two of The Age Of Misrule

6. Darkest Hour: Book 2 Of The World's End Trilogy (The Age of Misrule)

Book Description Gollancz, 2000. Hardcover. Condition: Very Good. No Dustjacket. All orders are dispatched the following working day from our UK warehouse. Established in 2004, we have over 500,000 books in stock. No quibble refund if not completely satisfied. Seller Inventory # mon0004590256

7. Darkest Hour: Book 2 Of The World's End Trilogy (The Age of Misrule)

8. Darkest Hour: Book 2 Of The World's End Trilogy (The Age of Misrule)

Book Description Paperback. Condition: Good. The book has been read but remains in clean condition. All pages are intact and the cover is intact. Some minor wear to the spine. Seller Inventory # GOR002347935

Shipping: US$ 8.53
From United Kingdom to U.S.A.
Destination, rates & speeds