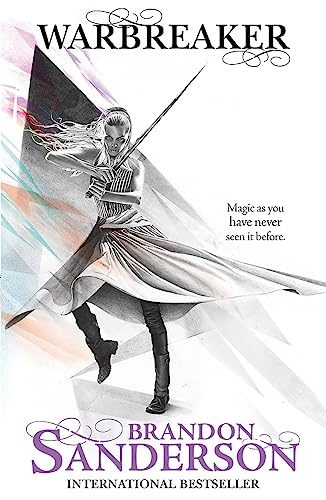 Brandon Sanderson was born in Nebraska in 1975. Since then he has written, amongst others The Mistborn books and begun the internationally bestselling Stormlight Archive. He was also chosen by Robert Jordan's family to complete Jordan's Wheel of Time Sequence. He lives in Utah. Visit his website at http://www.brandonsanderson.com, follow him on Twitter at https://twitter.com/BrandSanderson and like him on Facebook at https://www.facebook.com/BrandSanderson. Read his blogs at http://mistborn.blogspot.co.uk andhttp://mistborn.livejournal.com.

There were great advantages to being unimportant.

True, by many people’s standards, Siri wasn’t “unimportant.” She was, after all, the daughter of a king. Fortunately, her father had four living children, and Siri—at seventeen years of age—was the youn gest. Fafen, the daughter just older than Siri, had done the family duty and become a monk. Above Fafen was Ridger, the eldest son. He would inherit the throne.

And then there was Vivenna. Siri sighed as she walked down the path back to the city. Vivenna, the firstborn, was... well... Vivenna. Beautiful, poised, perfect in most every way. It was a good thing, too, considering the fact that she was betrothed to a god. Either way, Siri—as fourth child—was redundant. Vivenna and Ridger had to focus on their studies; Fafen had to do her work in the pastures and homes. Siri, however, could get away with being unimportant. That meant she could disappear into the wilderness for hours at a time.

People would notice, of course, and she would get into trouble. Yet even her father would have to admit that her disappearance hadn’t caused much inconvenience. The city got along just fine without Siri—in fact, it tended to do a little better when she wasn’t around.

Unimportance. To another, it might have been offensive. To Siri it was a blessing. She smiled, walking into the city proper. She drew the inevitable stares. While Bevalis was technically the capital of Idris, it wasn’t that big, and everyone knew her by sight. Judging by the stories Siri had heard from passing ramblemen, her home was hardly even a village compared with the massive metropolises in other nations.

She liked it the way it was, even with the muddy streets, the thatched cottages, and the boring—yet sturdy—stone walls. Women chasing runaway geese, men pulling donkeys laden with spring seed, and children leading sheep on their way to pasture. A grand city in Xaka, Hudres, or even terrible Hallandren might have exotic sights, but it would be crowded with faceless, shouting, jostling crowds, and haughty noblemen. Not Siri’s preference; she generally found even Bevalis to be a bit busy for her.

Still, she thought, looking down at her utilitarian grey dress, I’ll bet those cities have more colors. That’s something I might like to see.

Her hair wouldn’t stand out so much there. As usual, the long locks had gone blond with joy while she’d been out in the fields. She concentrated, trying to rein them in, but she was only able to bring the color to a dull brown. As soon as she stopped focusing, her hair just went back to the way it had been. She’d never been very good at controlling it. Not like Vivenna.

As she continued through the town, a group of small figures began trailing her. She smiled, pretending to ignore the children until one of them was brave enough to run forward and tug on her dress. Then she turned, smiling. They regarded her with solemn faces. Idris children were trained even at this age to avoid shameful outbursts of emotion. Austrin teachings said there was nothing wrong with feelings, but drawing attention to yourself with them was wrong.

Siri had never been very devout. It wasn’t her fault, she reasoned, if Austre had made her with a distinct inability to obey. The children waited patiently until Siri reached into her apron and pulled out a couple of brightly colored flowers. The children’s eyes opened wide, gazing at the vibrant colors. Three of the flowers were blue, one yellow.

The flowers stood out starkly against the town’s determined drabness. Other than what one could find in the skin and eyes of the people, there wasn’t a drop of color in sight. Stones had been whitewashed, clothing bleached grey or tan. All to keep the color away.

For without color, there could be no Awakeners.

The girl who had tugged Siri’s skirt finally took the flowers in one hand and dashed away with them, the other children following behind. Siri caught a look of disproval in the eyes of several passing villagers. None of them confronted her, though. Being a princess—even an unimportant one—did have its perks.

She continued on toward the palace. It was a low, single- story building with a large, packed- earth courtyard. Siri avoided the crowds of haggling people at the front, rounding to the back and going in the kitchen entrance. Mab, the kitchen mistress, stopped singing as the door opened, then eyed Siri.

“Your father’s been looking for you, child,“ Mab said, turning away and humming as she attacked a pile of onions.

“I suspect that he has.” Siri walked over and sniffed at a pot, which bore the calm scent of boiling potatoes.

“Went to the hills again, didn’t you? Skipped your tutorial sessions, I’ll bet.”

Siri smiled, then pulled out another of the bright yellow flowers, spinning it between two fingers.

Mab rolled her eyes. “And been corrupting the city youth again, I suspect. Honestly, girl, you should be beyond these things at your age. Your father will have words with you about shirking your responsibilities.”

“I like words,“ Siri said. “And I always learn a few new ones when Father gets angry. I shouldn’t neglect my education, now should I?”

Mab snorted, dicing some pickled cucumbers into the onions.

“Honestly, Mab,“ Siri said, twirling the flower, feeling her hair shade a little bit red. “I don’t see what the problem is. Austre made the flowers, right? He put the colors on them, so they can’t be evil. I mean, we call him God of Colors, for heaven’s sake.”

“Flowers ain’t evil,“ Mab said, adding something that looked like grass to her concoction, “assuming they’re left where Austre put them. We shouldn’t use Austre’s beauty to make ourselves more important.”

“Oh?” Mab asked, adding the grass, cucumber, and onions to one of her boiling pots. She banged the side of the pot with the flat of her knife, listening, then nodded to herself and began fishing under the counter for more vegetables. “You tell me,“ she continued, voice muffled. “You really think walking through the city with a flower like that didn’t draw attention to yourself?”

“That’s only because the city is so drab. If there were a bit of color around, nobody would notice a flower.”

Mab reappeared, hefting a box filled with various tubers. “You’d have us decorate the place like Hallandren? Maybe we should start inviting Awakeners into the city? How’d you like that? Some dev il sucking the souls out of children, strangling people with their own clothing? Bringing men back from the grave, then using their dead bodies for cheap labor? Sacrificing women on their unholy altars?”

Siri felt her hair whiten slightly with anxiety. Stop that! she thought. The hair seemed to have a mind of its own, responding to gut feelings.

“That sacrificing-maidens part is only a story,“ Siri said. “They don’t really do that.”

“Yes, they come from old women sitting by the hearth in the winter. I don’t think we need to be so frightened. The Hallandren will do what they want, which is fine by me, as long as they leave us alone.”

Mab chopped tubers, not looking up.

“We’ve got the treaty, Mab,“ Siri said. “Father and Vivenna will make sure we’re safe, and that will make the Hallandren leave us alone.”

“They will. You don’t need to worry.”

“They have better armies,“ Mab said, chopping, not looking up, “better steel, more food, and those... those things. It makes people worry. Maybe not you, but sensible folk.”

The cook’s words were hard to dismiss out of hand. Mab had a sense, a wisdom beyond her instinct for spices and broths. However, she also tended to fret. “You’re worrying about nothing, Mab. You’ll see.”

“I’m just saying that this is a bad time for a royal princess to be running around with flowers, standin’ out and inviting Austre’s dislike.”

Siri sighed. “Fine, then,“ she said, tossing her last flower into the stewpot. “Now we can all stand out together.”

Mab froze, then rolled her eyes, chopping a root. “I assume that was a vanavel flower?”

“Of course,“ Siri said, sniffing at the steaming pot. “I know better than to ruin a good stew. And I still say you’re overreacting.”

“Shouldn’t I report to my father?” Siri said, grabbing a gnarled vanavel root and beginning to chop.

“He’ll just send you back here and make you work in the kitchens as a punishment,“ Mab said, banging the pot with her knife again. She firmly believed that she could judge when a dish was done by the way the pot rang.

“Austre help me if Father ever discovers I like it down here.”

“You just like being close to the food,“ Mab said, fishing Siri’s flower out of the stew then tossing it aside. “Either way, you can’t report to him. He’s in conference with Yarda.”

Siri gave no reaction—she simply continued to chop. Her hair, however, grew blond with excitement. Father’s conferences with Yarda usually last hours, she thought. Not much point in simply sitting around, w...

Book Description Orion Publishing Co, United Kingdom, 2011. Paperback. Condition: New. Language: English. Brand new Book. WARBREAKER is the story of two sisters - who happen to be princesses, the God King one of them has to marry, a lesser god, and an immortal trying to undo the mistakes he made hundreds of years ago.Theirs is a world in which those who die in glory return as gods to live confined to a pantheon in Hallandren's capital city. A world transformed by BioChromatic magic, a power based on an essence known as breath. Using magic is arduous: breath can only be collected one unit at a time from individual people.But the rewards are great: by using breath and drawing upon the color in everyday objects, all manner of miracles and mischief can be performed.Brandon Sanderson proves again that he is a master of what Tolkien called 'secondary creation,' the invention of whole worlds, complete with magics and myths all their own. Seller Inventory # HUK9780575097469

Book Description Orion Publishing Co, United Kingdom, 2011. Paperback. Condition: New. Language: English. Brand new Book. WARBREAKER is the story of two sisters - who happen to be princesses, the God King one of them has to marry, a lesser god, and an immortal trying to undo the mistakes he made hundreds of years ago.Theirs is a world in which those who die in glory return as gods to live confined to a pantheon in Hallandren's capital city. A world transformed by BioChromatic magic, a power based on an essence known as breath. Using magic is arduous: breath can only be collected one unit at a time from individual people.But the rewards are great: by using breath and drawing upon the color in everyday objects, all manner of miracles and mischief can be performed.Brandon Sanderson proves again that he is a master of what Tolkien called 'secondary creation,' the invention of whole worlds, complete with magics and myths all their own. Seller Inventory # HUK9780575097469

Shipping: US$ 15.08
From United Kingdom to U.S.A.
Destination, rates & speeds