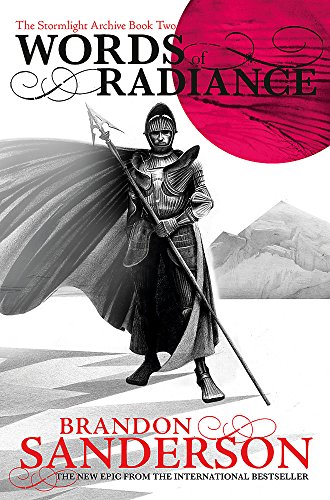 From the bestselling author who completed Robert Jordan's epic WHEEL OF TIME series comes a new, original creation that matches anything else in modern fantasy for epic scope, thrilling imagination, superb characters and sheer addictiveness. Return to a planet swept by apocalyptic storms, a world tipping into war as aristocratic families move to control the shard blades and shard plates, ancient artifacts from a past civilisation that can win wars. As the world tips into a war for control of the mythical artifacts of power made from Shard, characters are swept up into new dangers which will threaten their integrity and their lives. Huge, ideas-filled, world-spanning fantasy from a master of the genre.

Brandon Sanderson was born in Nebraska in 1975. Since then he has written, amongst others The Mistborn books and begun the internationally bestselling Stormlight Archive. He was also chosen by Robert Jordan's family to complete Jordan's Wheel of Time Sequence. He lives in Utah. Visit his website at http://www.brandonsanderson.com, follow him on Twitter at https://twitter.com/BrandSanderson and like him on Facebook at https://www.facebook.com/BrandSanderson. Read his blogs at http://mistborn.blogspot.co.uk andhttp://mistborn.livejournal.com.

*Starred Review* The readers of Sanderson’s The Way of Kings (2010) may have been waiting for him to return to the Stormlight Archives from his labors in finishing the late Robert Jordan’s epic Wheel of Time. The wait is now over, and devoted followers of fantasy on the grandest imaginable scale can make themselves comfortable and start reading. The world of Roshar is still very close to being a character in its own right (one thinks of Dune), as Sanderson has used the room afforded by a book of this size to build it in loving detail, including the fierce storms that make civilized life difficult even in peacetime. But the humans and the humanoid Parshendi are still fighting, although Brightlord Kholin is leading an army deep into enemy territory. His sister, Jasnah, is with him, seeking a legendary lost city that her student, Shallan, believes may hold the key to victory. Far below the level of the high command, the rising young slave warrior, Kaladin, learns that the Parshendi have a counterstrategy in preparation, one that portends the destruction of the world unless he can become the founder of a new order of the legendary Knights Radiant. Many readers will find Shallan and Kaladin the most absorbing of the major characters because they have the most to lose, but the characterization is on the whole as meticulous as the world-building. A very impressive continuation. --Roland Green

Book Description Gollancz, 2014. Hardcover. Condition: Good. Ex Library Book with usual stamps and stickers. Good condition is defined as: a copy that has been read but remains in clean condition. All of the pages are intact and the cover is intact and the spine may show signs of wear. The book may have minor markings which are not specifically mentioned. Most items will be dispatched the same or the next working day. Seller Inventory # mon0015918645

Shipping: US$ 11.27
From United Kingdom to U.S.A.
Destination, rates & speeds

Book Description Paperback. Condition: Very Good. The book has been read, but is in excellent condition. Pages are intact and not marred by notes or highlighting. The spine remains undamaged. Seller Inventory # CIN000461719