Items related to Modern Indonesia: A History Since 1945 (Postwar World) 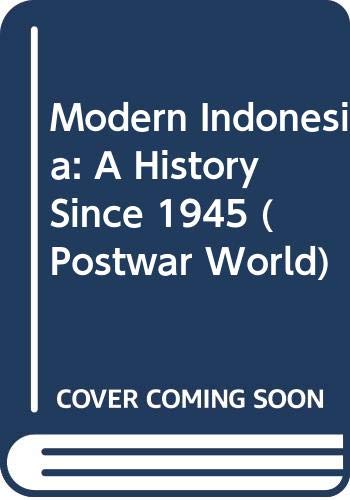 East Asia is now a centre of world attention politically as well as economically. One of its least known but potentially most important actors is Indonesia, whose vast territory of over 3000 islands proclaimed its independence after the ending of Japanese occupation in 1945. This concise but trenchant account of its history - the turbulent years under Sukarno followed by transformation, stability but international withdrawal under Suharto - is currently without a competitor. It provides an invaluable introduction to a republic which, under a younger, more self-confident generation, seems poised to assume a regional and global role commensurate with its status as the world's fourth most populous nation.

"Indeed one of the delights in its reading is measuring the skill, both stylistic and substantive, of its authors in compressing complexity and exposing and exploring significance in so brief a compass. It is, quite simply, the best short history of modern Indonesia I have read." "Rima"

Book Description Longman Publishing Group. Paperback. Condition: Fair. A readable copy. All pages are intact, and the cover is intact. Pages can include considerable notes-in pen or highlighter-but the notes cannot obscure the text. At ThriftBooks, our motto is: Read More, Spend Less. Seller Inventory # G0582057132I5N00

Book Description Longman Pub Group, 1996. Condition: Good. A+ Customer service! Satisfaction Guaranteed! Book is in Used-Good condition. Pages and cover are clean and intact. Used items may not include supplementary materials such as CDs or access codes. May show signs of minor shelf wear and contain limited notes and highlighting. Seller Inventory # 0582057132-2-4

7. Modern Indonesia: A History since 1945 (The Postwar World)

Book Description Longman, 1995. Condition: Good. This is an ex-library book and may have the usual library/used-book markings inside.This book has soft covers. In good all round condition. Please note the Image in this listing is a stock photo and may not match the covers of the actual item,350grams, ISBN:9780582057135. Seller Inventory # 8051198

8. Modern Indonesia a History Since 1945