Items related to China in Transformation 1900-1949 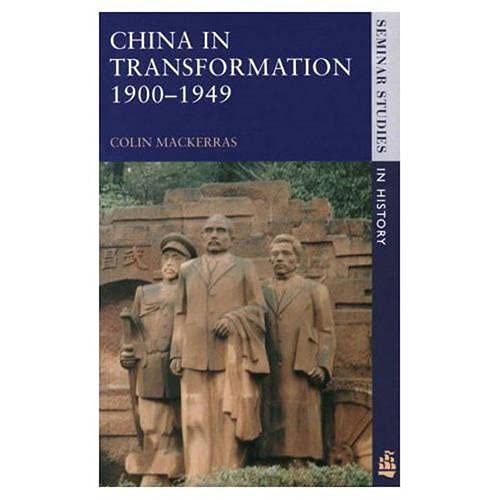 A lucid introduction to the history of modern China from the Boxer Rebellion in 1900 through to the founding of the People's Republic of China in 1949. Within a chronological framework the author explores the forces of nationalism, modernisation and change in a period of revolution, occupation and civil war. Two thematic chapters look at social change through the period (in particular, the status of women) and education and the student movement. Written by the editor of the best-selling survey,Eastern Asia, this is an ideal text for anyone tackling the complexities of Chinese history for the first time.

In the first half of the twentieth century, China moved from a millennium of imperial rule to the Communist Party-led People’s Republic of China which remains today.  China in Transformation argues that this enormously significant period in Chinese history saw wrenching change throughout Chinese society amounting to a social, cultural and political transformation. This new, fully revised and updated edition takes full advantage of new research and formerly unavailable material to analyse the fascinating processes of revolution, reform, reaction and change in China during the period. Mackerras:

·        Discusses the wars, occupations and uprisings that marked the period, including the Boxer Rebellion and the Japanese occupation and includes a new chapter on postwar China and the Civil War

·        Examines nation-building and revolutions, including the successful communist movement that has led to the rise of today’s state

·        Acknowledges the prevalence of poverty and famine in the period but also gives space to the areas in which there was progress:  the introduction of mass, secular education, improvements in the status of women, and in a new chapter, details significant developments in culture, literature and theatre

Written in an accessible style, with a rich collection of Documents, Chronology, Glossary, a Guide to Further Reading, and a Who’s Who summarising the careers and contributions of the main figures, this new edition is essential for all those interested in understanding China’s modern history.

Colin Mackerras is a professor emeritus in the Department of International Business and Asian Studies, Griffith University, Queensland. He has written eleven single-authored books about China. He won a Centenary Medal, awarded by the Governor-General of Australia in April 2003 and was appointed an officer in the Order of Australia (AO)in the Queen’s Birthday honours list of June 2007, in both cases for his contribution to education and for his work in Australia-China relations.