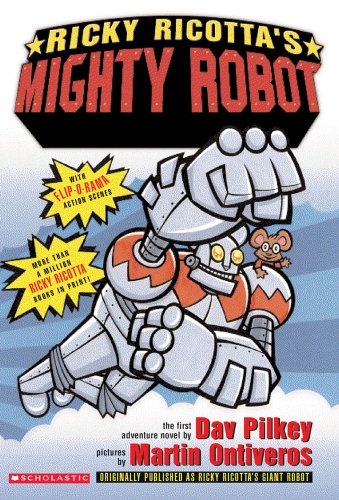 Ricky Ricotta, a small mouse, saves a giant robot from his evil creator, Dr. Stinky, and in turn, the robot protects Ricky from the bullies at school and it saves the city from Dr. Stinky's plan to destroy it. Simultaneous.

The Iron Giant meets Clifford the Big Red Dog in Dav Pilkey's Ricky Ricotta's Giant Robot, the first book in an illustrated series for early readers. Ricky is a young mouse who needs a friend, is bullied by schoolmates, and is waiting for something BIG to happen. But he never expected the arrival of anything as big as Dr. Stinky McNasty's giant robot, created by the evil doctor to destroy all of Squeakyville. When the robot refuses to demolish the town, however, Ricky steps up to save it from the ensuing wrath of the maniacal doctor--twice! In some very Clifford-esque perspectives, the friendly iron giant dwarfs Ricky's neighborhood, scares crows (and bullies), and allows Ricky's new friends to ride on his back. In the end children will be satisfied to see the doctor's secret cave detonated by the very electro-rocket he wanted to use on his errant robot, and even more satisfied to see the robot depositing Dr. Stinky McNasty into the city jail. (Ages 6 and older)

Dav Pilkey has written and illustrated numerous popular, award-winning books for children, including the Captain Underpants and Dumb Bunnies series; DOG BREATH, winner of the California Young Reader Medal; and THE PAPERBOY, a Caldecott Honor Book. He lives with his wife in the Pacific Northwest. Visit him online at www.pilkey.com.

Book Description Condition: New. Ricky Ricotta, a small mouse, saves a giant robot from his evil creator, Dr. Stinky, and in turn, the robot protects Ricky from the bullies at school and saves the city from Dr. Stinky's plan to destroy it. Seller Inventory # 9780590307208