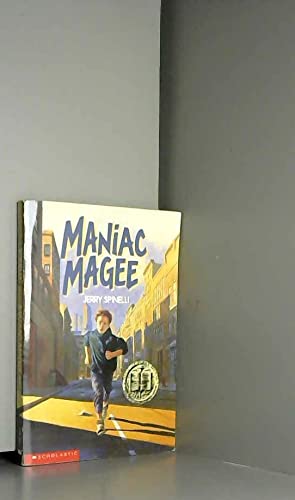 When Jeffrey Lionel Magee, a scruffy 12-year-old kid, wanders into Two Mills, Pennsylvania, a legend is in the making.

Maniac Magee is a folk story about a boy, a very excitable boy. One that can outrun dogs, hit a home run off the best pitcher in the neighborhood, tie a knot no one can undo. "Kid's gotta be a maniac," is what the folks in Two Mills say. It's also the story of how this boy, Jeffrey Lionel "Maniac" Magee, confronts racism in a small town, tries to find a home where there is none and attempts to soothe tensions between rival factions on the tough side of town. Presented as a folk tale, it's the stuff of storytelling. "The history of a kid," says Jerry Spinelli, "is one part fact, two parts legend, and three parts snowball." And for this kid, four parts of fun. Maniac Magee won the 1991 Newbery Medal.

Read by S. Ephatha Merkerson
Approx. 3.75 hours
3 cassettes
He wasn?t born with the name Maniac Magee. He came into this world named Jeffrey Lionel Magee, but when his parents died and his life changed, so did his name. And Maniac Magee became a legend. Even today kids talk about how fast he could run; about how he hit an inside-the-park ?frog? homer; how no knot, no matter how snarled, would stay that way once he began to untie it. But the thing Maniac Magee is best known for is what he did for the kids from the East Side and those from the West Side.