Items related to Freak the Mighty 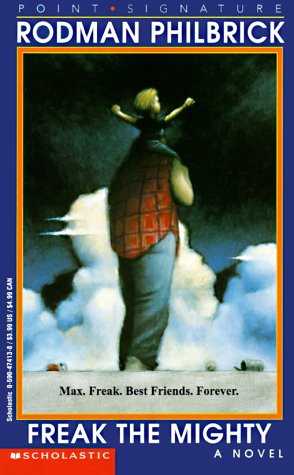 Embarrassed by his slow cognitive abilities and his huge size, Max resigns himself to a life as a misfit until he meets Freak, a tiny person with a genius I.Q., who teams up with Max to form a special bond. Reprint. SLJ. AB. K.

That's what they used to yell at me, and then they'd run like crazy because I'm the spitting image of my bad old dad. Or so they say. I never gave it a lot of thought because basically it was easier to act brainless, and when you're as big as I am, people believe it. There were things I didn't want to remember. Bad things, terrible things.
Everything changed when Freak moved into the neighborhood. Little dude about two feet tall, he was smarter than Einstein. The weird thing is, he wasn't afraid of me. No way, he was too smart for that. I never had a brain until Freak came along and let me borrow his. And then together we became Freak the Mighty, slaying dragons and fools and walking high above the world....

In the twenty years since its publication, Freak the Mighty has become a classic novel with close to three million copies in print. This edition includes author essays about his inspiration for the book, colorful stories about being a writer, letters from readers, and thoughts about bullying, growing up, and schools.

Rodman Philbrick's powerful, poignant novel will continue to touch hearts around the world for years to come.

Freak was weird, too. He had a little body -- and a really big brain. Together Max and Freak were unstoppable.

Together, they were Freak the Mighty.